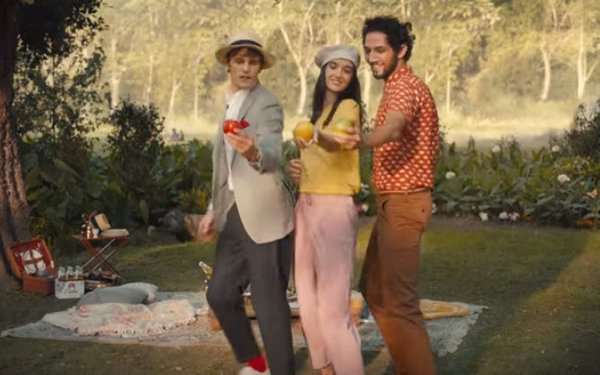 Stella Artois Cidre is out with a new television ad/video that might be described as something of a mini “La La Land” — with a French twist.

The whimsical spot (30-second version below), from Stella Artois’s creative agency of record, Mother New York, is titled “Dancing in a Modest Forest.”

It features an attractive, clearly hip young trio — a woman and two guys — breaking into a joyous line dance in front of an elaborate picnic setup (complete with ice bucket) laid out in a clearing in the woods.

The woman, who is wearing a white beret, kicks off the dance with “un, deux, trois” and a toast with Stella Artois Cidre. Three apples fall from the sky and are effortlessly caught by the dancers as part of the performance.

The dance was choreographed by award-winning music video choreographer Ryan Heffington. The music: a Screechy Dan cover of The Stereos’ doo-wop classic “I Really Love You.” Produced by Victor Axelrod, the track “combines a mix of three genres to create a balance of harmonies,” in Mother New York’s words.

That aligns with the ad’s message — which, as a male voiceover explains, is that Stella Artois Cidre has “three apple varieties for a perfectly balanced flavor.”

The brand’s objectives for the campaign include establishing itself as the go-to premium brand within the rapidly growing U.S. cider market; appealing to white wine and rose drinkers; dispelling the assumption that cider is only for the fall; and pointing out that Cidre is a great choice for picnics and other al fresco activities, according to the agency.

Several different formats of the ad were created for broadcast and digital channels.

A 15-second version is being featured on the brand’s Facebook and Instagram pages (the latter has generated more than 18,000 views in a week). Programmatically bought digital ads will also run throughout the campaign, which ends in mid October.