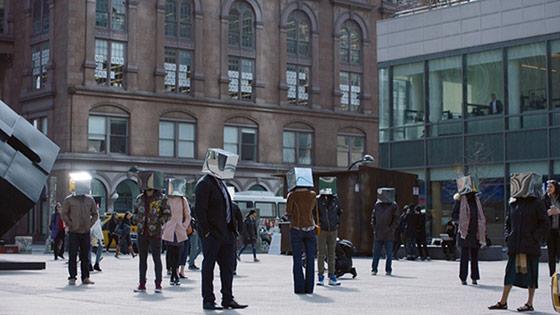 The 2017 Tribeca Film Festival, presented by AT&T,  has tapped DDB New York for the "See Yourself in Others" campaign to raise awareness for the upcoming event taking place April 19-30.

The concept addresses the turmoil between groups or individuals whose beliefs, politcis backgrounds, lifestyles—even appearances—differ from one another.

"This past year has been so divisive, we felt it was time to restate this message," says Ian Daly, chief strategy officer, Tribeca Enterprises. "All this enmity taught us that, what we thought was obvious, still bears repeating: We are more alike than different. And this whole human experiment is only going to work if we learn how to love and accept one another.”

A short film features New Yorkers wearing  five-sided mirrored cubes on their heads as onlookers encounter them with their own reflection on the body of the other.  As part of the project directed by Jared Knecht of m ss ng p eces, actors bedecked with the mirrored heads walked around New York City, where passersby reacted in their own, unscripted way. The message is designed to encourage people to literally see themselves in others.

“Stories put us in unfamiliar or uncomfortable situations and force us to confront other points of view," stated Icaro Doria, chief creative officer, DDB New York. "Once we’re inside, the universal human truths we find there help us find ourselves—even in faraway places and radically different cultures. More than ever, we need these stories and we need this empathy. Because we need each other."

The film will run online and before select screenings during the festival. The accompanying print and digital advertising swaps the heads and bodies of people from very different backgrounds to make the same point.

This initiative marks the first work for the festival from DDB. Noble People is Tribeca’s Media AOR.