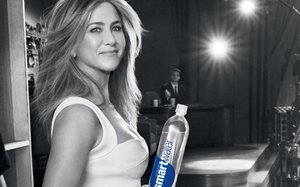 In the latest extension of Jennifer Aniston’s longtime brand rep role for Coca-Cola’s Smartwater, the star is depicted with the water in hand in downtime moments, as well as glamorous, job-related activities.

The campaign — which includes print magazines, digital and social platforms, and out-of-home across the country, but no television — focuses on Smartwater’s “purity and clean taste.”

The images show Aniston backstage before going on a talk show (above); hitting the red carpet; on a canyon hike with her dog, and serving Smartwater sparkling (launched last year) during a dinner party with friends.

Shot by Tom Munro, the images are black-and-white except for the blue elements on the Smartwater bottle.

The campaign, from lead agency Chandelier Creative, will also include events and partnerships over the summer.

The concept is to “celebrate the authentic role that Smartwater has in Jennifer Aniston's life, a partner as she moves through both relatable and aspirational moments of progress — from fitness to fashion to dinner with friends,” summed up the brand’s group director, Caroline Kibler.

Smartwater commands about 45% of the U.S. “premium” bottled water segment by volume, followed by Wonderful Company’s Fiji (19%) and Nestle’s San Pellegrino (12%), according to Beverage Digest.

But with per-capita bottled water consumption by volume, which rose 8% last year to 39.3 galls, to officially eclipse carbonated soda consumption (38.5 gallons) for the first time, competition is heating up.

Coca-Cola arch rival PepsiCo launched its own premium entry, Lifewtr, in February. And both Lifewtr and Fiji invested in Superbowl ads this year (30- and 15-second ones, respectively).