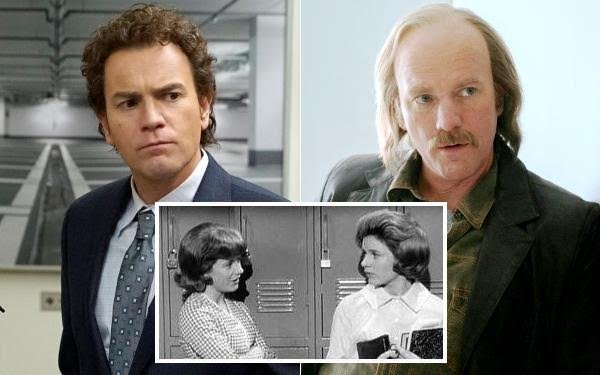 It's the latest, greatest craze at the kooky, eclectic cable channel -- casting its stars in dual roles. It’s a nod to the greatest of all TV Golden Ages -- the freaky, far-out, psychedelic ’60s.

Back then, TV was so weird and wild that cousins could be identical twins! Patty Duke played two of them (inset, above) -- Brooklyn teen Patty Lane and her upper-crust British cuz, Cathy Lane -- in “The Patty Duke Show.”

And who can forget Samantha's evil twin cousin Serena, the dark-haired witch on “Bewitched”? Well, apparently the execs and producers behind the new third season of “Fargo” cannot forget any of TV's classic twins because they have an actor, Ewan McGregor, playing brothers who are not technically twins at all, and yet, they look so much alike!

The casting of McGregor as Minnesota parking lot kingpin Emmit Stussy (above left) and his younger brother, Ray (right), a parole officer, follows closely on the heels of FX's other doppelganger duo, Chip and Dale Baskets, both played by Zach Galifianakis in the anti-comedy “Baskets” about a sad clown who lives an unfunny, pathetic life.

What a crazy pair? You betcha! McGregor may be Scottish, but in “Fargo,” he makes every effort to adopt the classic North Dakota-ish brogue that every actor in “Fargo” -- both the original 1996 movie and the two previous TV seasons -- tries to master.

And doncha know it? McGregor makes a success of it a couple of times! By Jiminy, imagine that.

In the new TV “Fargo,” premiering Wednesday night on FX, some people in a small town somewhere in either North Dakota or Minnesota or possibly both (does it really matter?) are visited by some crooks from somewhere else who insinuate themselves into their lives and wreak havoc.

Hey, wait a minute -- that description pretty much covers the previous two TV “Fargos” plus the movie. Well, as any one of the laconic residents of these North Dakota and Minnesota towns depicted in these “Fargo” shows might say, laconically: If it ain't broke, don't fix it. Yah.

Not only do the usual baddies show up from out of town in this new “Fargo,” but a couple of locals are up to no good too. Aw, heck, ain't that always the case?

In the “Fargo” movie, the crooks were Peter Stormare and Steve Buscemi, aided and abetted by William H. Macy.

Shucks, those “Fargo” producers are full of surprises, aren't they? They have at least one surprise in store in the new “Fargo,” a death by air conditioner. Ironic? You bet it is! You see, it's ironic that someone in this Minnesota (or North Dakota) setting gets killed by a falling air conditioner because it's so cold there. Get it?

Yes, it is very cold in “Fargo,” these windblown TV shows (plus the original movie) seem to say, which raises a question: Why do these bad guys go there in the first place, and not somewhere warmer? Criminals -- they sure are hard to figure, Gern dern it!

Well, with pretty much the same things happening in this new “Fargo” as in the three previous ones (out-of-town crooks showing up to murder people and all that), it’s plain to see that the gimmick this time around is the use of Ewan McGregor in this dual role as brothers who aren't twins, but look like they are.

If they're not quite “one pair of matching bookends,” as the “Patty Duke” theme might say, they are “different as night and day.” You betcha!