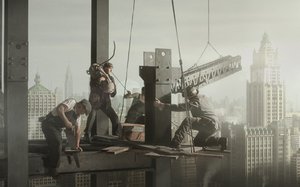 Carhartt—a brand many people associate with temperatures as rugged as the he-men who wear those heavy-duty britches—is introducing a new spring campaign to push its warmer-weather clothes. And like its previous efforts, it builds on the authenticity of the company’s 128-year-old history, as seen through the eyes of Jason (Game of Thrones) Momoa.

The new ad, voiced by the spirit of founder Hamilton Carhartt, relies on archival inspiration to show how the brand has been worn in the toughest jobs, from filthy trenches in WWI to skyscraper construction in America’s early cities. It claims its clothes are constructed for “anyone who fears no weather or world before them,” and focuses on the extremes of outdoor work in the spring. The new clothing line uses two new weatherproofing systems, called Storm Defender Force Extremes and Carhartt Force. “There are 92 unpredictable days of spring,” the ad says. “We’ve got your back for every single one.”

“There are more new products,” says Tony Ambroza, Carhartt’s SVP/marketing, “so we want to get people thinking, ‘I am now going to be reaching for Carhartt when the mercury rises, not just when it falls.’ We know they think of us when it’s cold, and sometimes weather reporters even use phrases like ‘Carhartt weather’ when it’s especially bad in winter.”

The ad is running on sports programming, including Major League Baseball and playoff games for both the NHL and NBA.

The campaign also includes digital, mobile, social and is in many retail locations, as well as its 30 stand-alone stores.

The campaign, developed by the Dearborn, Mich.-based company’s creative team, is directed by Momoa, who has worked on previous campaigns. (Momoa also stars in a longer-form content video called “The canvas of my life,” explaining how one particular pair of pants expresses his commitment to art, adventure, and his family.)

Ambroza tells Marketing Daily the new work fits in with another spring marketing effort, “Strikeouts for Vets,” which donates $100 every time one of its lineup of major-league pitchers strikes out a batter. (The pitchers include Michael Fulmer, Detroit Tigers; Jacob deGrom, New York Mets, and Corey Kluber, Cleveland Indians, and benefits Helmets to Hardhats, which helps veterans find work in construction trades.)

Since 2010, Carhartt has been hard at work expanding its identity, at once going deeper into the world of workgear (like flame-resistant shirts specially designed for women working in electrical utilities) and into much broader cultural efforts. Those include partnerships with the likes of musician Eminem and opening its first Work In Progress store in the United States, in New York’s trendy SoHo district.

“We’ve been aggressively investing in marketing and spent a lot of time broadening our consumer audience,” he says. And whether it’s targeting construction crews, hunters, or hipsters, “the common thread is that these are people who love to make things.”

But even as Carhartt works to broaden its reach beyond workwear, others are looking to build their muscle, too, including Dickies, and Duluth Trading Co. Execs at rival VF Corp., parent of rugged Wrangler jeans and Timberland boots, recently told investors it is targeting the category for significant expansion.