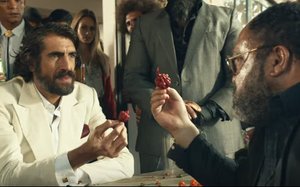 With Cinco de Mayo falling on partying-friendly Friday this year — and Dos Equis celebrating its 120th anniversary — the brand is ponying up for a particularly significant holiday push.

Its “Spice Up Your Cinco” campaign includes a new TV spot, a New York City party featuring renowned DJ Questlove, and a sweepstakes.

The “Cinco Peppers” TV ad is the latest featuring the “Most Interesting Man in the World,” now played by Augustin Legrand. (The ad’s 30-second English version requires sign-in to view on YouTube. See the 15-second Spanish-language version below.)

The character is shown winning a hot pepper-eating contest with a tough-as-nails-looking dude. In the longer version, “The Man’s” feisty female companion also demonstrates an impressive ability to take the heat.

Voiceover messaging: “Attending his Cinco de Mayo party requires signing a release form. It is said the sun comes up later on the sixth of May in case his parties run long …” The ad will continue to run through May.

The new “Most Interesting Man,” unveiled last September, starred in his first TV ads starting last fall. The creative is from Havas New York, which originated the famous campaign.

The brand’s New York Cinco de Mayo party (actually being held on April 27), is dubbed “Mercado XX” for its Mexican street market theme. It will feature an appearance by “The Most Interesting Man,” in addition to DJ-ing by Questlove.

The “Spice Up Your Cinco” sweeps, being run in the weeks leading up to Cinco de Mayo, offers daily prizes and a grand-prize trip to Mexico that includes vacation time in Cancúnand a tour of the Dos Equis brewery.