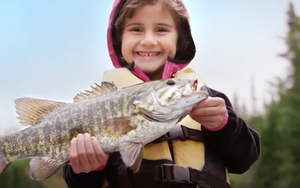 In today’s technology-heavy times, sometimes it takes a little effort to get the kids outdoors. Sometimes, it just takes the promise of lasting memories.

The Recreational Boating and Fishing Foundation this week is launching the next phase of its “Take me fishing” campaign, which promotes boating and fishing as a family-friendly, technology-free activity.

“We’re faced with technology that is over-complicating our lives, and fishing and boating isn’t doing that,” Dustin Black, group creative director at Colle + McVoy, the agency behind the campaign, tells Marketing Daily. “We’re trying to tap into the energy and nostalgia of fishing and boating.”

At the heart of the campaign is a 30-second television spot that depicts the excitement of fishing and boating through the eyes of children. The spot shows parents and kids interacting on the water as a kid’s voiceover proclaims she doesn’t “need a touchscreen. I need to feel something real.” As the shots continue, a boy proclaims “nature is my playground” and a fish on a line is his “participation trophy.” The spot ends with the kids encouraging parents to take them out on the water.

The spot will run nationally. In addition to the commercial, the campaign will include digital elements using the same video, but onscreen text suggesting families “let the birds do the tweeting” and family time as “the original group chat.” There will also be social, print, PR and influencer engagement, as well as partnerships with Disney’s media properties and resorts, Black says.