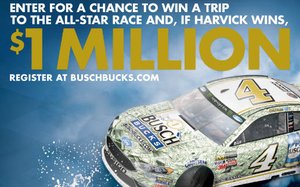 To promote its new Busch Bucks loyalty platform and its NASCAR sponsorship, Busch beer is tying a $1 million giveaway to both.

Busch is the primary sponsor for the No. 4 car driven by Kevin Harvick.

The $1 million will be given away only if Harvick wins NASCAR’s All-Star Race on May 20. (The winning driver’s prize for that race is also $1 million.)

Consumers of legal drinking age who enroll in the loyalty program at BuschBucks.com between April 17 and May 6 will be automatically entered for chances to win.

The winner of the sweeps will get a weekend trip to attend the All-Star race at Charlotte Motor Speedway and watch from a front-row seat. If Harvick wins, he or she will also be awarded the $1 million check.

To promote the giveaway, Harvick’s car will be painted with a special “million-dollar” Busch Bucks design.

Busch’s additional support of the program is mostly through owned social media, according to a brand rep.

Busch, which invested in numerous NASCAR sponsorships between 1978 and 2007, returned to racing in 2016 with a sponsorship of Harvick and the No. 4 car (part of Stewart-Hass Racing) for 12 races. The beer brand expanded the partnership in 2017 to serve as the primary sponsor for 16 races.