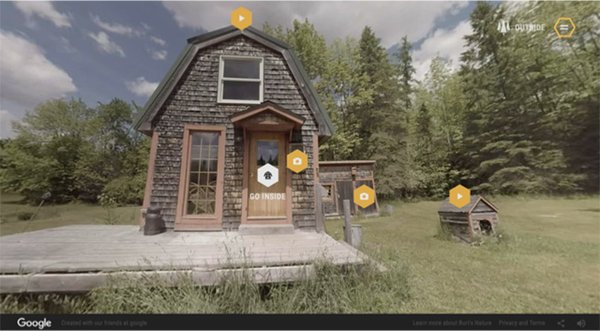 Burt’s Bees wanted to create a permanent tribute to Burt Shavitz, its late, great co-founder. After all, his bearded image is still on every product it sells, and his life — lived out in simplicity in a tiny turkey coop in the Maine hinterlands — embodied many of the values the Clorox-owned company says it still stands for, like simplicity, beauty in nature, and of course, bees.

So the company has torn down the 300-square-foot cabin and reassembled it in the middle of its Durham, N.C. headquarters, with an elaborate virtual-reality experience, including video interviews with Shavitz, who died in 2015 at the age of 80.

“We decided to move it to headquarters as a project to commemorate Burt,” says Katharine Belloir, account director at Baldwin&, the Raleigh, N.C.-based agency that represents Burt’s Bees. “We worked with Google and Media Monks to recreate the cabin experience, so you can look out of windows and see exactly what Burt saw, in a 360-degree view.”

The new exhibit joins the company’s Observation Hive and Matthew Willey’s Good of the Hive Mural, both also located at the brand’s headquarters in Durham’s American Tobacco Campus, an urban revitalization project with 1.5 million annual visitors.

Belloir tells Marketing Daily the permanent exhibit offers a peek into the real Shavitz. “People can come stand on his porch, put on the viewfinder and get to know Burt, including taking a close look at his artifacts,” she says.

While Shavitz was undoubtedly the King of Rustic and a tiny-house pioneer, his relationship with the company he co-founded, not to mention Roxanne Quimby, the other co-founder, was as bristly as that famous beard.

To summarize what has become beauty-business legend: While his name remained on the company, he was pushed out 15 years after its founding, which he said was due to an affair with a co-worker. (He also had an affair with Quimby.) Quimby bought him out in 1999, reportedly for a house valued at $130,000. The New York Times later estimated that his share would have been worth $59 million in the 2007 sale of the company to Clorox. And his take on the corporate parent? Well, “except for the fact that they’re from Clorox, they’re nice people,” he told the New Yorker.

Belloir says that despite the barbs, he also had a great affection for the company. “I met him several times, and you could tell he still cared about it,”  she says. And Burt’s Bees customers are still enthusiastic about the brand’s homespun vibe. “They really embrace the values he did,” she says, “especially living simply and being so close to nature.”

While Clorox doesn’t break out the results of Burt’s Bees, in its most recent quarterly results, it credits innovations in its lip care and color products with driving 4% sales growth in its lifestyles division. And in a recent presentation to investors, it says 2017 launches are scheduled to include Lip Balm with Flavor Crystals, as well as an entirely new category, stepping into consumables with Burt’s Bees Protein Drink.