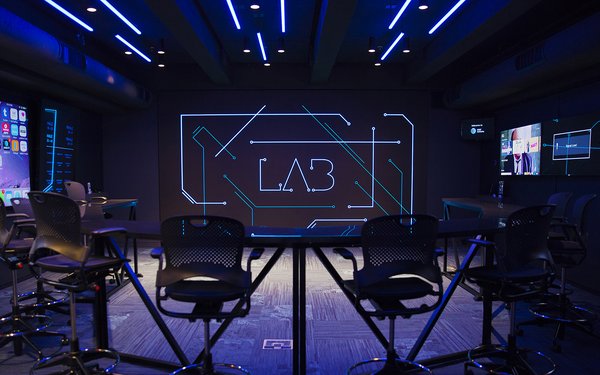 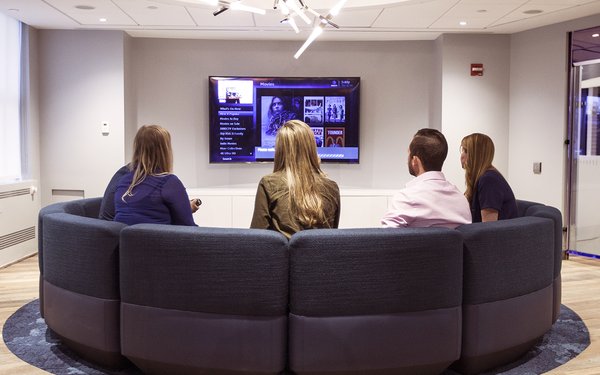 AdWorks said the Media Lab, located at Rockefeller Center in New York, is a place to bring clients and partners to demonstrate how consumers are diving into cross-screen experiences and the advanced targeting capabilities addressable TV, among other ad technologies, can offer.

AT&T’s opening of the Lab comes as marketers gear up for the annual ad blitz of upfronts and digital NewFronts. AT&T is eager to showcase its heft in addressable TV, in particular, and lock up advertising commitments.

The company said it currently has 15 million addressable TV households out of 25 million total TV households and the largest base of paid TV subscribers. Overall, the company reaches 150 million consumer screens. In addition, it has 134 million mobility subscribers, and the ability to tap into mobile and set-top-box data.

The AT&T AdWorks Lab seeks to present the future of consumer media consumption.

For example, The Lab features a Living Room of the Future that showcases multiscreen viewing, over-the-top TV platforms, and third-party IoT devices, providing a glimpse of how these technologies will work together to enable more targeted advertising. Visitors to the Lab can interact with data visualization tools that show how data powers audience targeting approaches in TV, mobile, and out-of-home  media.

Beyond the living room, visitors also can learn more about IoT, can climb into the driver’s seat of a connected car, and experience a VR adventure based on AT&T’s latest ad campaign involving a personalized trip to outer space. Visitors will also get a chance to interact with AT&T’s recently launched data-driven linear TV product, addressable TV and cross-screen advertising offering, interactive data visualizations that map TV viewing behaviors, and more.

Dunsche noted that because of AT&T’s verifiable billing relationships and anonymized set-top box data, it has the advantage of being able to target audiences that are watching specific programs and even to target different members within households.

She demonstrated the capability on a large touch screen to show how media planners can create and customize audience targets. “We can serve ads to specific mobile devices and households based on the demographics of the billing relationship. We’re getting very powerful data that’s used as the backbone of our audience targeting platform,” she said.

Dunsche noted the combined impact of mobile and TV, adding that AT&T’s addressable TV households are also tied to 30 million mobile devices: “We’re able to track if we served an ad to a household on TV or mobile, and what the impact is.”

To further illustrate the efficacy of cross-screen addressable advertising, Dunsch offered an example of AT&T looking to convert a wireless competitor's subscribers to AT&T Wireless service. The campaign, which ran last year, used mobile and TV ads and saw an 18% lift from the addressable campaign on TV.

But when TV was combined with mobile, AT&T achieved a 27% lift in actual sales conversion. Mobile alone achieved a 4% lift. “We’re able to track back anonymously to the same consumer across platforms,” Dunsche said.

AT&T also sees opportunity in branded content, which includes native advertising and event sponsorships, virtual reality and augmented reality, over-the-top TV services, and programmatic TV. Dunsche said over the long term, she expects AT&T to automate the entire planning, buying, measurement and reporting process across all of its inventory. But admits, “we’re not there yet.”