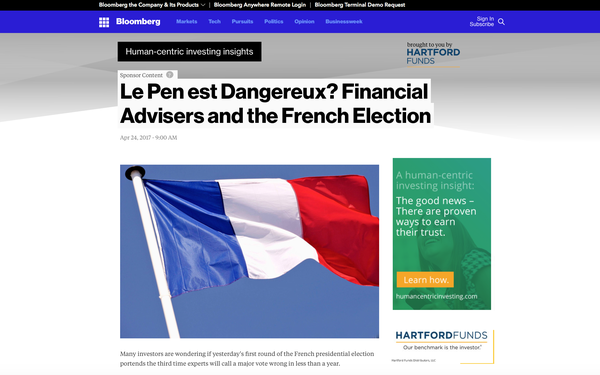 Hartford Funds and Bloomberg Media Studios have tossed out the marketing playbook used by nearly every financial company.

Instead, the two companies devised their own native branding campaign playbook around current day news. Previously they focused on market-moving events, like Brexit, the presidential debates and the election itself.

The 2017 campaign, which includes 11 pieces of custom content on Bloomberg’s website, kicks off this week with the next major market-moving event: the controversial French election.

Digital custom content is distributed via promos on Bloomberg.com on desktop, mobile and tablet devices and amplified via social extensions (Bloomberg's LinkedIn, Twitter and Outbrain feeds). The print execution consists of "spreadvertorials:" custom content page with adjacent brand ad. These will appear in three issues of the bi-monthly Bloomberg Markets magazine.

The Hartford Funds' own digital campaign consists of brand ads, which appear run of the Bloomberg.com site as well as several home pager takeovers throughout the year. The brand will also run a 14-week schedule of brand ads on Bloomberg Radio.

This year’s campaign is expanding with the addition of a four-part custom series podcast premiering in the fall which will live on bloomberg.com.

Hartford Funds also has an editorial sponsorship of the Bloomberg podcast "Masters in Business" which will feature a 2 minute cut-down version of the custom podcast.

“Our ‘Market Moving Moments’ program with Bloomberg aims to be the calm in the storm for advisors during key news cycle events, offering unique perspective they can use to engage clients during some of their most stressful investing moments,” Swanson says.