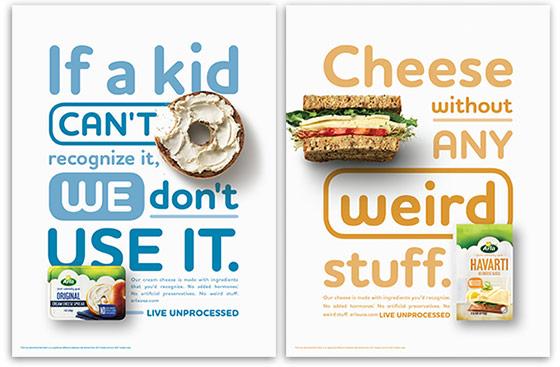 Arla Foods is supporting its first major push into the U.S. grocery aisle with a $30 million advertising campaign that is designed to differentiate itself from competitors such as Kraft and Sargento.

Developed with Carmichael Lynch, the "Live Unprocessed" messaging recognizes the international dairy cooperative's history with 12,500+ farmers who believe that cheese should be made without anything artificial – no antibiotics, no hormones, no stabilizers.

"People today increasingly want to know more about the products they’re eating and feeding their families," says Don Stohrer, Jr., CEO of Arla Foods. "Arla has a 136-year heritage of producing natural, better-for-you products free from artificial flavors, preservatives and added hormones, but our brand awareness in the U.S. is relatively low. We wanted our campaign to highlight how our products address people’s needs in a fresh, fun and disruptive way."

The creative asked kids what, or who, they thought rBST, Xanthan and Sorcic Acid were, without letting them know they were ingredients often found in competitors’ sliced and cream cheeses. These responses were then imagined as "fantastical" characters and stories.

The fully-integrated campaign is focused on video and TV, appearing across more than twenty national cable networks, broadcast and video-on-demand publishers. Partnerships with Time Inc. and Conde Nast will develop custom content via influencer videos and blogs and there will be content integrations featuring Enviable Mom celebrities (Ayesha Curry), and showcasing the Live Unprocessed lifestyle (Scary Mommy, Red Tricycle).

A complementary documentary chronicling the creative process behind this campaign debuted at the Village East Cinema in New York City on April 25 before expanding to YouTube, Arla’s website, and Facebook, with additional media spend as well as broader native placements among contextually relevant content.

In addition, Arla is teaming with several mom influencers, including Daphne Oz and Curry, to help further raise awareness and buzz for both the documentary and the food brand. Oz has been a partner of the brand for over a year now, while Curry is a new partner for the brand this year.

"Both women have a deep expertise and passion for good food made well," says Stohrer Jr. "They are both parents and seek out foods with simple ingredients for their families. They're a great representation of the audience that we believe to be influential to the brand and its growth in the next few years."

The launch of this campaign aligns with Arla expanding its business into the retail grocery dairy aisle for the first time in its history with sliced cheese, snack cheese and cream cheese.

"'Live Unprocessed' is about more than the food we make," says Stohrer, Jr. "It’s really more of a mindset that speaks to the increasing number of people today who are looking for ways to 'unprocess' their lives."