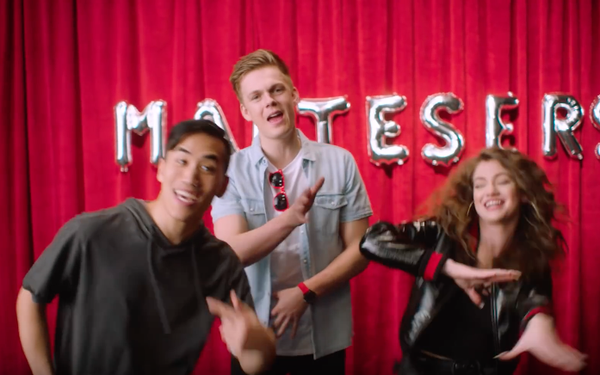 Maltesers, a longtime bestseller for Mars in the U.K., led all other bite-sized candies in that market last year, according to Nielsen data. The spherical candy’s airy, malt center is covered with chocolate.

The 3:30 video, the centerpiece of the “Look on the Light Side” campaign from BBDO, is showing nearly 2.8 million views on YouTube after 16 days.

The video features YouTube stars Caspar Lee and Andrew Huang, along with social media dancing star Dytto, singing, rapping, dancing, spraying each other with water and paint, playing foosball (using a piece of Maltesers candy), and recommending Maltesers as a quick-chill fix for teen crises like bad hair days and sweat stains. The brand is encouraging tends to share about turning negative #FML (“fxxx my life”) moments into “Fun Maltesers Life” moments.

Throughout the year, the three social media influencers will use videos and other content to demonstrate how they look on the light side. Paid support across social media channels will also continue, including cut-down posts of custom content and a sponsored content partnership with BuzzFeed. In May, the brand will release results of a survey about how teens maintain a positive perspective.

In addition, the brand will be distributing 10 million samples, and engaging teens with games and a photo area, during a year-long “Maltesers Record Breaking Tour.” The tour launched in mid April, with Maltersers as the presenting sponsor of the Betty Who Tour. Other sponsored events will include the Warped Tour, DigiFest, Wango Tango and Vidcon.

In-store merchandising and e-coupons are also supporting the U.S. retail rollout, which was preceded by a test in select movie theaters in September 2015.