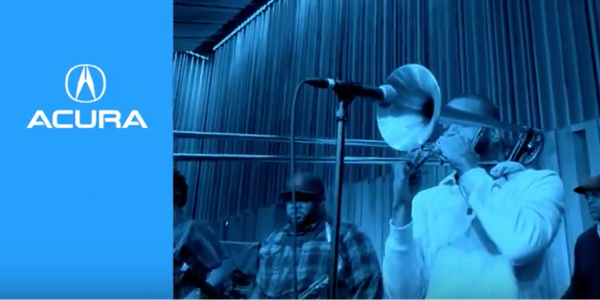 With music such an integral part of its marketing, it makes sense that Acura would look for other music-related tie-ins and sponsorships.

The foundation is involved with musical education, instruction, mentorship and performance in the region. Acura’s support of the non-profit Trombone Shorty Foundation will help the organization create a year-round impact on the city’s cultural community,

The automaker is also launching a long-form video to showcase the foundation, and how it helps NOLA’s music and arts community. Troy “Trombone Shorty” Andrews is an iconic bandleader, singer, songwriter and producer.

In conjunction with the Trombone Shorty Foundation, for the second year Acura will serve as the official automotive sponsor of the Shorty Fest benefit concert hosted by Trombone Shorty. Shorty Fest is the Foundation’s main New Orleans annual fundraiser and is scheduled for May 4 at the House of Blues. Trombone Shorty, backed by his band Orleans Avenue, also is marking his fifth year closing out the Acura Stage at Jazz Fest.

At the Festival, the automaker is again set to present The Acura Main Stage, or “Acura Stage,” that has hosted legendary musicians each year at Jazz Fest. The tradition continues in 2017 with a diverse range of performances by some of the world’s most celebrated musicians including Maroon 5, Kings of Leon and Harry Connick Jr.

Music has become an integral part of the brand’s marketing and communication with customers, and can be heard in the most recent campaigns and vehicle communications. Most recently, Kid Ink’s “The Movement” helped launch the 2018 TLX, Beck’s “Wow” headlined the 2017 MDX marketing campaign, and Van Halen’s “Runnin’ with the Devil” served as the soundtrack for Acura’s 2016 Super Bowl TV spot, starring the next-generation NSX.

Acura isn’t the only automaker focusing on music-related sponsorships. For the third consecutive year, Toyota -- in partnership with VH1 Save The Music Foundation -- will donate instruments and valuable resources to assist music education programs in public schools, as they have previously done in Chicago and New Orleans.

Launching at Stagecoach Festival in Indio, California on April 28, the #ToyotaGiving and VH1 Save The Music campaign is an interactive summer music festival activation at six festivals. The campaign features on-site and social media participation from festivalgoers while simultaneously increasing awareness of the importance of music education. The campaign benefits VH1 Save The Music Foundation, a national nonprofit organization committed to restoring music education programs in America’s public schools. Toyota will present an education grant to a yet-to-be-determined Las Vegas school in partnership with VH1 Save The Music and Life is Beautiful Music & Art Festival.

Each of the six festival stops on the #ToyotaGiving partnership tour will include a unique photo mosaic mural activation. The mosaic will develop in real time throughout the duration of each festival using photos that artists and festival attendees post on social media with the #ToyotaGiving hashtag and a message about what music means to them.

This is the third philanthropic partnership between VH1 Save The Music and Toyota. The 2015 campaign culminated in a surprise appearance by pop singer Santigold during a school assembly at which a grant was presented to LaPlace Elementary in New Orleans. The grant provided students with their first music education program in over a decade. In 2016, a grant aided Chicago-area music education programs by providing instruments and equipment to students, and Chicago-bred urban gospel singer Sir The Baptist performed with students.