Hyundai Gives Fans A Look At Road To The NFL 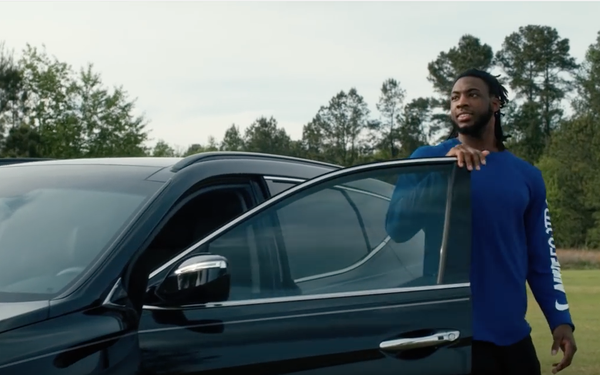 As part of each of the films, the players — Mitchell Trubisky, O.J. Howard, Mike Williams and Haason Reddick — collaborated with Marcus Rivero, aka SolesBySir, to design a custom wrap for a Hyundai Santa Fe. The videos and the wraps are part of the automaker’s multifaceted Draft program, Rolling with the Rookies.

Prospects will be selected this week at the 2017 NFL Draft in Philadelphia.

Hyundai partnered with four future NFL rookies, who are all projected to be taken in the first round in various mock drafts. During the lead-up to the draft, Hyundai filmed the prospects in their hometowns and talked with the people who helped make their dreams a reality, capturing their unique stories -- from pee wee football to high school through college.

“The NFL Draft is where it all begins for the league’s future stars, and we wanted to give fans a better and more immersive experience by telling the incredible stories of these four top prospects,” said Dean Evans, CMO, Hyundai Motor America, in a release. “These players exemplify the power of hard work and perseverance through adversity in making their NFL dreams a reality, and it was compelling to see their stories represented in each Santa Fe wrap.”

In Philadelphia, Hyundai will have a Rolling with the Rookies activation inside the NFL Draft Experience. This will include the four custom-designed Santa Fes, as well as interactive exhibits highlighting footage and memorabilia from each player’s life. In addition, Hyundai is also the presenting sponsor of Selection Square, which is home to the 32 team Draft tables and the location of Rounds 4-7.

The mini-documentaries and all of the content for Rolling with the Rookies presented by Hyundai can be found at Hyundaiusa.com/NFL, on Hyundai’s YouTube channel and at HyundaiNews.com.

Hyundai is entering its third season as an official NFL sponsor and the league’s official car and SUV. It also has relationships with six teams, including the Arizona Cardinals, Houston Texans, Los Angeles Rams, Miami Dolphins, Minnesota Vikings and Pittsburgh Steelers. Hyundai’s 2017 NFL Draft content and activation is managed by Advantage.