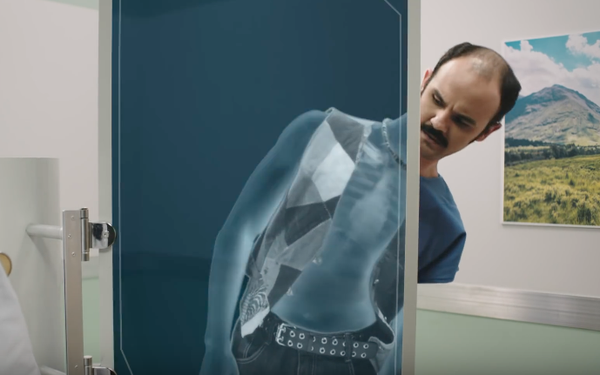 The videos, from Latinworks, broadly play off the theme of the brand’s long-running “You’re Not You When You’re Hungry” campaign, from BBDO New York. But in this case, the premise is that hunger can transform people on the inside, causing them to act oddly, even if they look the same outwardly.

The vignettes are meant to illustrate the tagline message for the two varieties: “Same on the outside. Different on the inside.”

The latest 30-second video, for the newly launched Snickers & Hazelnut, involves a doctor advising a patient who’s inexplicably singing in a falsetto voice to eat one of the candy bars. Reason: An x-ray shows that on the inside, the patient is dressing and gyrating like a member of a 90’s Latino boy band.

The other video, for Snickers Almond, shows an airport employee advising a woman who’s acting prima donna-ish to eat one of the bars because her security x-ray reveals that she’s feeling like a princessa at a quinceñeara (traditional 15th birthday party for Latino girls). That video, released in mid-April, is currently showing more than 67,000 views on YouTube.

Snickers Almond, launched in 2002, has had little paid advertising support. The new campaign aims to raise awareness and support wider distribution, according to a rep for the brand.

Overall, the campaign for the two line extensions reflects Mars research that found that U.S. Hispanics over-index on seeking variety in their candy choices. In addition, this audience is highly engaged with branded digital content.

In addition to promotion of video clips on owned social channels, the videos are receiving 12 weeks of paid support via programmatic online network buys. The campaign also includes other promotions and in-store displays.