Wienermobile Travels To Remotest Town In U.S. As Part Of Brand Makeover Bid 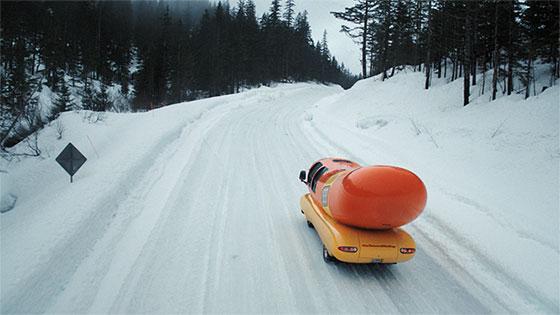 Oscar Mayer and creative AOR mcgarrybowen are supporting the hot dog brand's makeover with a campaign featuring the Weinermobile’s first-ever trip to Whittier, Alaska, the most remote town in America. (Or one of them anyway, depending on which list you believe.)

Starcom is handling the media portion of the campaign.

The creative is based on Oscar Mayer's goal to get one of its new hot dogs—now made with no added by-products or artificial preservatives—into every hand in America. The traveling hot dog vehicle is venturing to less obvious destinations, in addition to its usual baseball park and summer festival itinerary.

“When we say we’re going to great lengths to get our hot dogs in every hand, we mean it,” said Whitney Shaw, director, Oscar Mayer brand build, Kraft Heinz. “We’re putting the Wienermobile on water in New York Harbor for the first time, visiting remote towns outside the contiguous United States and empowering the Wienermobile drivers to make as many off-the-beaten-path stops as they can make. We’re doing it all for the love of hot dogs.”

To help jump-start this three-month adventure, the Alaska journey has been transformed into print and video elements. The video shows the wienermobile navigating icy roads with some difficulty before eventually arriving in the 220-person town.

Six vehicles are now traveling to various events across the U.S. Fans are encouraged to use #ForTheLoveOfHotDogs hashtag to help determine additional locations for potential Wienermobile stops.

Oscar Mayer and Starcom are putting a significant, integrated media push behind this new campaign. The strategy returns the brand to prime-time TV after years being off-air, with national buys, including family TV “tent pole” moments.

Print ads will run in monthly and weekly entertainment and food publications, like Bon Appétit. Radio ads will air in numerous markets during weather, news and traffic reports.

The digital strategy includes programmatic audience targeting, augmented with other reach vehicles. Paid social on Facebook, Twitter and Instagram are also in the mix. Olson Engage is responsible for PR.