Campaign Takes Aim At The Most Littered Item On The Planet 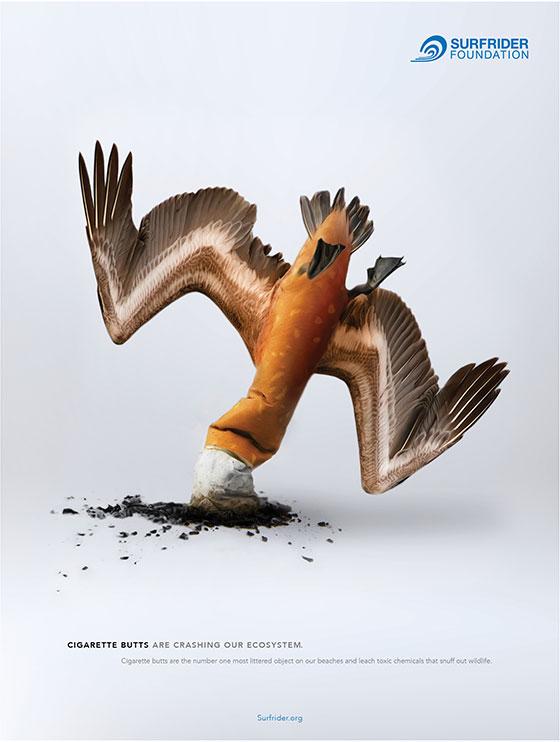 Cigarette butts are the No. 1 littered item on the planet, a fact that grassroots environmental group Surfrider Foundation intends to highlight in a new campaign created with Dentsu Aegis ad shop gyro San Francisco.

According to Surfrider, more than 4 trillion cigarette butts are littered every year, impacting the environment and flowing down into the planet’s waterways.

The butts—which are made of plastic and don’t biodegrade--leach chemicals, such as arsenic and nicotine and heavy metals, including lead, cadmium and chromium, into the water and soil. They impact marine life, habitats and ecosystems.

To make people think more about the environmental impact of littered butts, gyro and Surfrider have created a campaign called “Snuffed Out Marine Life.”

One ad in the campaign states: “Cigarette butts are crashing our ecosystem.” It is accompanied by an illustration of a snuffed out cigarette butt with wings and webbed feet protruding from it — an image that evokes the crumpled remains of a bird after a crash landing.

“Cigarette butts are the No. 1 most littered object on our beaches and leach toxic chemicals that snuff out wildlife,” the ad states.

Another ad notes that butts “flow downstream and into our food chain.” It also uses a snuffed-out butt illustration but with scales and fins to punctuate how fish are put at risk from exposure to the hazardous litter.

The campaign ads will appear in national and regional print (including the Financial Times and Marin magazine, respectively) as well as social and digital. Plans are being considered for a future OOH effort, as well. Ads also cite the Surfrider.org site for those who want to learn more.

“There's been a cultural shift that has defined what types of behavior are just not acceptable anymore, like not picking up after your dog or throwing garbage out the car window,” said gyro San Francisco president Drew Meyers. “We hope this awareness effort will help change behavior and make people think twice about flicking their cigarettes, especially for the sake of our planet.”