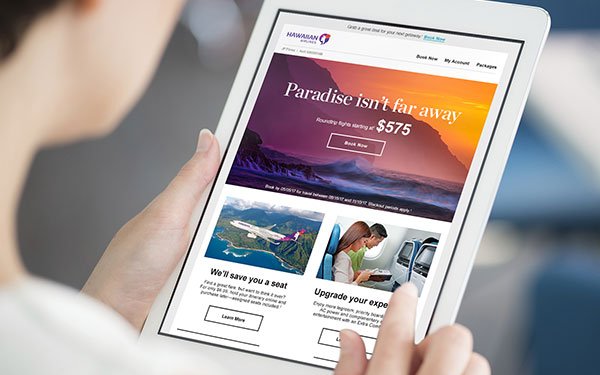 Hawaiian Airlines is rebranding its identity with a new logo and refreshed icon as the 88-year-old airline undergoes a "transition year" that includes expanding its fleet with 18 new planes in the next couple of years.

Working with global design shop Lippincott, the new identity retains Hawaiian’s color palette of purple, fuchsia and coral as well as brand icon Pualani. However, the new logo and design emphasize Pualani by featuring her more prominently and "liberating" her from the floral “holding shape” of the former logo.

The refreshed identity is debuting across web and digital assets, airport lobby signage and kiosks, and at boarding gates. Painting of all aircraft and ground service equipment is scheduled to be complete by 2020. The airline will also roll out new uniforms for its frontline employees, themed K Mkou or Together We Stand, by the end of 2017.

Hawaiian’s brand team and Lippincott spent a year studying the airline’s history, working with a committee of front-line employees, and immersing themselves in Hawaiian culture to arrive at the new design. While slight variations were made to the red hibiscus in her hair over the years, Pualani’s last substantive makeover was in 2001 when Hawaiian’s new inter-island Boeing 717s and transpacific Boeing 767s entered the fleet.

“Our new livery embodies a stronger, more contemporary representation of the culture of service and hospitality that forms the bedrock of our guest experience and sets Hawaiian Airlines apart in the industry,” stated Mark Dunkerley, president, CEO, Hawaiian Airlines. “It acknowledges our place as Hawaii’s preeminent airline and underscores the commitment our employees make every day to provide our guests with a gracious and genuine island welcome.”

The redesign is just one of a series of major investments Hawaiian has made to aircraft cabins, lounges, and other aspects of the customer experience over the past five years. The largest of these is the introduction of the A321neo fleet which will be phased in starting later this year. This fleet is designed to help Hawaiian serve some smaller U.S. West Coast routes that are impractical with its current all wide-body long-haul fleet while also providing replacement lift for the retiring Boeing 767. Recently the airline revealed a new cabin design for the new aircraft which evokes Hawaii in every detail.