Bully Pulpit: Colbert Demeaned Himself With Gutter Attack On Trump 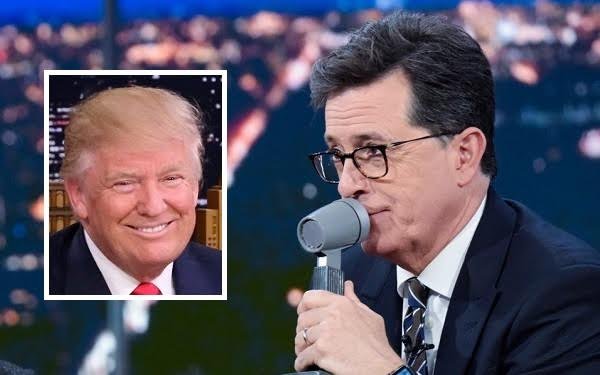 Stephen Colbert damaged his own integrity with his vile attack on Donald Trump this week on “The Late Show” on CBS.

Getting down in a gutter to make a point about how he feels about the President of the United States was not a shrewd strategy. In so doing, Colbert put himself on the same level as his target.

Satire such as the kind practiced by Colbert works better when delivered from higher ground. Colbert himself should have had the good sense to know this.

If he was experiencing a lapse in judgement that day, then CBS’s executive in charge of overseeing “The Late Show” should have stepped in and applied a blue pencil to some portions of Colbert’s monologue.

This didn’t happen and Colbert took a beating the next day, particularly on the front page of The New York Post, where the headline described his Tuesday monologue as a “vulgar rant,” which it was.

The ostensible reason for Colbert’s attack on Trump was Trump’s disdain of John Dickerson, anchor of the CBS News show “Face the Nation,” when Dickerson interviewed the president in the White House last Saturday. The date -- April 29 -- was the 100th day of Trump’s administration.

In the interview, Trump told Dickerson he mocks the venerable news show by nicknaming it “Deface the Nation.”

Later, Trump abruptly ended the interview when Dickerson pressed him on the accusations Trump made earlier this year that the Obama administration wiretapped his private phones. Video of the incident has been replayed often on TV ever since.

In the final minute or two of his 12-minute monologue on Tuesday, Colbert took it upon himself to avenge Trump’s treatment of Dickerson with some of the most disgusting language ever heard on late-night television, which is saying a lot.

The vulgarity got underway earlier in the monologue when Colbert began laying the groundwork for his later attack on Trump over the Dickerson interview. Introducing a video clip of Dickerson asking Trump about his tax returns, Colbert had this to say:

“Mr. President, can you talk about your tax return as a metaphor for your penis?”

Then Trump was shown telling Dickerson, “I have a very big tax return.”

Then Colbert said, “We get it -- you have a huge tax return! But you know what would be nice? A full release!” There are some of us who still think material like this is gross. Are we in the minority today? Probably.

That was only the beginning, however. With a few minutes left in his monologue, Colbert threw all caution to the wind and then delivered some of the worst monologue material that a major TV network ever let out into the air.

“Donald Trump, John Dickerson is a fair-minded journalist,” Colbert said, “and one of the most competent people who will ever walk into your office and you treat him like that. Now, John Dickerson has way too much dignity to trade insults with the President of the United States to his face, but I, sir, am no John Dickerson.

“Let me introduce you to something we call the Tiffany way. When you insult one member of the CBS family, you insult us all! Bazinga!”

Then the attack began in earnest. “Here we go,” Colbert said. “Mr. Trump? Your presidency? I love your presidency. I call it Disgrace the Nation!

“You’re not the POTUS, you’re the Blotus!

“You’re the glutton with the button! You’re a regular Gorge Washington! You’re the presi-dunce! But you’re turning into a real prick-tator!

“Sir, you attract more skinheads than free Rogaine! You have more people marching against you than cancer! You talk like a sign-language gorilla who got hit in the head!”

And here’s the line that set a new low standard in broadcast network comedy: “In fact, the only thing your mouth is good for is being Vladimir Putin’s c--- holster!” Please note that this particular word was bleeped, but “prick,” as in “prick-tator,” was not. We truly live in a new media era.

The attack continued for a few more lines. “Your presidential library is going to be a kids’ menu and a couple of Juggs magazines! The only thing smaller than your hands is your tax returns! And you can take that any way you want!” Colbert declared as the monologue came to an end.

Colbert’s attacks on Trump this year are credited with elevating his ratings past Jimmy Fallon’s on NBC, and that may be true. But Tuesday’s disgusting monologue suggests that Colbert has grown arrogant. Gutter comedy should not become his way, “the Tiffany way” or CBS’s way.