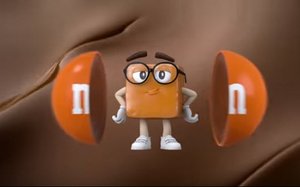 M&M’s Caramel — the brand’s biggest launch in its 75-year history, being celebrated this year — is finally here.

Fans have been burning up the Internet about the new variety — featuring a caramel center covered in milk chocolate and the iconic candy shell — since the Mars brand announced last October that it was on its way.

Now M&M’s Caramel is in stores, and the launch campaign, from BBDO New York, is kicking into full gear.

The first 30-second TV spot debuted tonight (May 7) during the “MTV Movie and TV Awards.” It will also be airing on popular NBC and CBS shows, including late-night shows, for 19 weeks.

Called “Group Talk,” the ad (below) shows the iconic M&M’s animated characters seated in a conference room doing interviews for the brand’s next spokesperson.

Several of the group point out that the current candidate, a square piece of caramel wearing glasses with heavy black frames, is awfully boring. The would-be caramel spokesperson says he’ll just leave them his (laminated) resume, whereupon M&M Red says, “No, thanks,” but M&M Yellow proclaims, “You’re hired!”

The ending voiceover message: “Caramel has been square for far too long. Introducing new Caramel M&M’s.”

The campaign will also include print and out-of-home advertising, according to a brand rep.

M&M’s has been helping to stoke the anticipation with teasers featuring #UnsquareCaramel.

In April, influencers promoted a sweeps encouraging fans to share their blog posts about M&M’s Caramel on any social platform (save Facebook), using the hashtag #UnsquareCaramelSweepstakes, for chances to win samples of the candy before it was in stores.

M&M’s began alerting fans to the candy’s arrival in Walmarts early this month, with posts and GIFs on Twitter and other social channels.

Fan action is particularly heavy at #mmscaramel. The new caramel candy is also in takeover mode on the Mars Wrigley site MyConfectionCorner, which has an embedded Twitter feed.