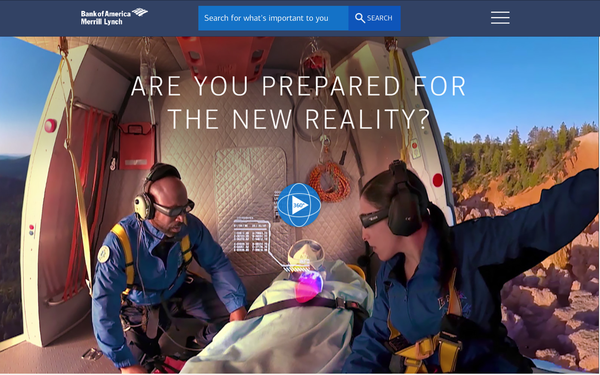 Bank of America Merrill Lynch is launching a campaign that brings its virtual reality research and experience to life.

The financial services company is kicking off the campaign with a series of private events for clients -- corporate investors, institutional investors and small businesses -- to share its findings on how these future realities will transform business in the very near future.

The effort includes a dedicated Web site, which is being promoted on Twitter and LinkedIn, and Google Cardboard and Samsung Gear VR experiences.  An online campaign launches May 22 on Bloomberg and Institutional Investor. The creative aims to create stopping power: an eye-catching image that captures the transformative nature of VR.

Agencies involved with the project include GroupeConnect, Brand Union and Burson-Marsteller. Ripple Collective produced the VR piece itself.

“We’ve been talking with our partners for about a year now, watching the developments in artificial reality, and thinking about when it might make sense to venture in,” Brennan tells Marketing Daily. “Lots of interesting ideas were tossed around, but this was the first concept that allowed us to be true to the medium and the purpose of the work, which is to educate and inspire. In other words, the medium became part of the message, and the story was better told because of it.”

“Our goal at the firm is to make the complex easier for our clients,” she says. “Today, with continual change the norm, we try to focus on insights that help them make sense of it all, and propel their businesses forward.”

This is the first time Bank of America Merrill Lynch has used VR in its marketing.

“This could signal an important shift in the marketing toolkit for our industry -- a way to combine storytelling, data visualization and education in an entertaining and insightful way,” Brennan says.