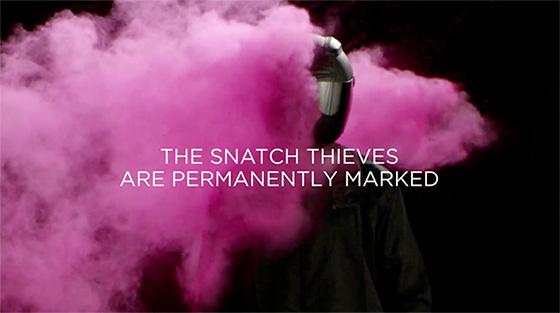 You know those packets of cash that banks keep on hand in the event of a robbery that explode and spray dye all over the perpetrators? Now an apparel firm has developed a similar, but more advanced device in a bid to curb purse snatching.

WPP’s Ogilvy & Mather has been retained to promote it.

O&M is helping apparel and accessories brand Ash Be Nimble launch its new anti-purse-snatching product in Malaysia, where handbag theft is rampant, often brutally violent and usually unsolved. Many thieves escape quickly on motorbikes, frequently dragging victims through the streets if they resist.

The new device looks like an accessory to a handbag. But if the bag is stolen, the victim can quickly dial an sms code into a mobile phone that triggers the device to spray permanent dye on the thief and release a highly visible plume of purple smoke. The device also contains GPS-like tracking technology.

Ogilvy created this video about the purse snatching epidemic in the region and how the device works to potentially help reduce it.

Ash Be Nimble is also working with the National Council of Women’s Organizations Malaysia (NCWO) on a petition to call for stricter laws on snatch thefts, which are seen by many in the country as too lax.