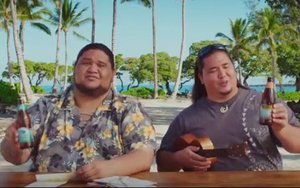 Kona Brewing Company’s “Bruddahs” may just be the most productive laid-back duo in advertising history.

The not-so-dynamic Hawaiian pair — played by Dave Bell of Waimea and Blake “Brutus” La Benz of Honolulu — have been kicking butt for the beer brand since 2014, simply by giving new meaning to the verb “chill.”

That was the year that the characters debuted in a multimedia “Dear Mainland” campaign from Duncan Channon. Their gig: sitting on a gorgeous Hawaiian beach making wry observations about "common mainlander customs" like multitasking, and advising all to slow down and enjoy life’s real pleasures — like nature, friends and family, and Kona’s two core beers, Longboard Island Lager and Big Wave Golden Ale.

The brewery, launched in 1994 by a father-and-son team, was already in 40 states and growing quickly. But this largest ad campaign to date fueled new momentum. Sales jumped 37% in the markets where it aired — the third-largest lift recorded by IRI in 12 years, according to the brand. (By volume, Kona’s volume increased from 133,400 barrels in 2010 to 352,100 in 2014.) In 2016, Kona expanded the now multimillion-dollar campaign and realized another 15% sales lift in targeted markets.

Not surprisingly, the Bruddahs are back again for summer 2017. The basic concept — summed up by its continuing tagline, “One life, right? Don’t blow it” — is the same.

But this time around, the ad formats have been expanded beyond traditional TV spots and print, to include social and digital ads.

Also, much of the new creative is themed around the follies of spending so much of our lives staring at screens, rather than connecting with the world and people around us.

The obsession is good-naturedly satirized in three 15-second videos that launched this week and will run through September 3 on Facebook and Instagram.

One (below) tweaks the absurdity of spending hours on phone games, trying to catch “invisible monsters” to collect points (“Why you wanna do that?”). The others satirize the convoluted, dysfunctional dramas of reality TV and the inanity of viral videos.
“The brothers’ tongue-in-cheek banter about pop culture content that keeps us chained to our screens reminds us that we sometimes need to put down the phone, turn off the TV or close that YouTube video to get out and enjoy life,” sums up Duncan Channon Executive Director Anne Elisco-Lemme.

The brand will simultaneously be running other short videos, under the theme “Dear Kona,” on Facebook and Instagram. In these, the Bruddahs respond to fictional letters from mainlanders — mostly asking for advice about how to deal with situations like a boss who labels every email “urgent”; a job that requires nonstop meetings; and finding oneself living for Fridays.

These spots will air only on Thursdays, to tie into a theme introduced in last year’s creative: According to the Bruddahs, Thursdays should be treated like “Little Fridays.” That is also the theme of a new sweeps that will be promoted on social media and in stores.

Kona is also going showbiz. It’s partnered with the A.V. Club to film a TV special starring musicians Thao and Zipper Club in its home locale. The special will air nationally on Fusion TV on Aug. 31. In addition, it will sponsor a concert featuring those two artists plus Boulevards at L.A.’s Hotel Café on July 20, and a series of “Little Friday Acoustic” sessions to be hosted on the Club’s site over the summer.

At the same time, three still-popular TV spots that launched in 2014 — “Little Fridays,” “FOMO” and “Sad Hour” — will be airing between May and September in L.A., San Francisco, San Diego and Sacramento.

Kona Brewing is owned by Portland, Oregon-based Craft Brew Alliance, which is nearly 32% owned by Anheuser-Busch InBev. CBA (which also owns other craft beer brands, including Redhook and Widmer Brothers) and ABI have invested in the expansion of Kona’s brewing facilities, as well as its distribution and marketing in the U.S., and now distribute Kona beer in international markets including Brazil and Mexico, according to MarketWatch.