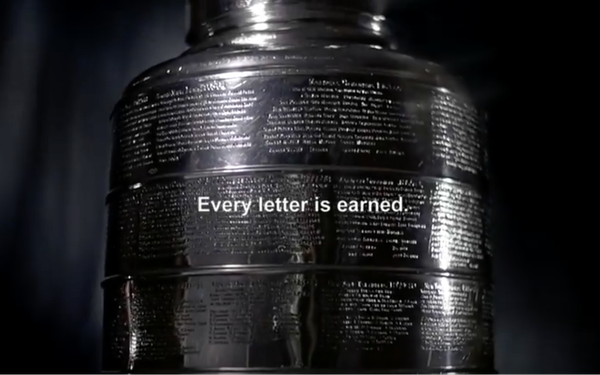 A TV spot from the National Hockey League breaking this week during the Stanley Cup playoffs highlights the greatest hockey players ever and the trophy that bears their names.

"Like previous Stanley Cup Final TV spots, ‘Spelling’ focuses on a revered tradition that is unique and deeply meaningful to hockey: the pride of having your name forever immortalized on the Stanley Cup," NHL Chief Brand Officer Brian Jennings tells Marketing Daily. “In keeping with our yearlong celebration of 100 years of NHL hockey, it was only fitting that we spotlight 23 members of the 100 Greatest NHL Players who helped shape the first century of the League and future generations of the game.”

The 60-second spot, created by Baby Bear’s Porridge, aims to capture the “magnificence” of having one’s name engraved on The Stanley Cup, according to the agency. The players may come from different eras and different teams, but they are all united by this singular accomplishment.

“Spelling” was directed by Samuel Bayer of Superprime Films. This is the first time these many hockey superstars have ever been brought together for a shoot, said Editor Steve Bell of Cutters Studios New York.

“That made this whole project pretty special for all of us, and it felt like even the players were enjoying it,” Bell says.