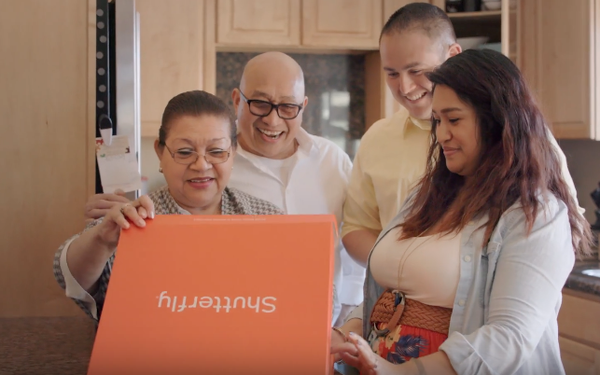 Enough with the pedicures, perfumes and pineapple-filled brunches. If consumers really want to make an impact on Mother’s Day (or Father’s Day, for that matter), Shutterfly suggests creating something personal and emotional.

“Shutterfly has been trying to explain why their products are so great, but they’re such personal things. They create an emotional connection,” Elaine Cox, creative director at Heat (which created a new Mother’s and Father’s Day campaign for the company), tells Marketing Daily. “The challenge was to communicate to those who are on autopilot [for gifts] to take a little time to make something personal.”

The new effort features real customers opening Shutterfly boxes and the emotional reactions to finding the gifts inside. While some reactions — like the reveal of a baby’s gender — elicit screams of joy, others provoke tears of emotion and quiet reflection. That mix of reactions was important to making the point that the gifts are effectively personal, Cox says.

“People love watching reaction videos,” she says, citing the popularity of videos showing returning service people as one example. “People connect with things that are emotional, and that’s what Shutterfly brings.”

The agency filmed the families under the guise of doing a broader documentary about familial connections (though the gift-giver was in on the idea that the video would be used for marketing purposes) to get access to the events, proving the reactions would be genuine.

“It was important for us to have that diversity of reactions,” says Jonathan “JB” Byrne, another creative director at Heat. “We were pleasantly surprised at how genuine and overwhelming every product was.”

The company also encouraged others to upload their own reaction videos, Cox says. “Some of the user-generated stuff is even more endearing than some of the stuff we captured for ourselves,” she says.

While the bulk of Shutterfly’s business comes around the holidays in the form of personalized holiday cards, calendars, ornaments, and the like, Mother’s Day and Father’s Day saw only minimal marketing investment, despite the reactions the photo gifts receive. The campaign sets the stage for the company to claim an emotional space its competitors had not taken advantage of, Byrne says.

“A lot of [competitors] are simply talking about their products,” he says. “The emotional impact of giving a gift was out there for anybody.”

The Mother’s Day spots have been running on digital and social channels for about a month, but the company is gearing up for a similar Father’s Day push, and will likely use the strategy for other holidays (including “the holidays”) as well.

“The idea is an evergreen thing,” Cox says. “We’re looking for new ways to convey the different reactions.”