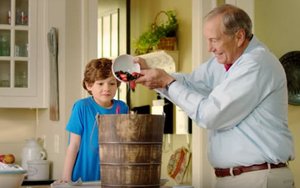 The brand is an ensconced favorite in the Southeast, including Tennessee, Alabama and Atlanta. Now, it’s expanding into new markets across the South and Southwest, including Dallas, Houston and Phoenix.

The new campaign “represents a substantial investment increase from previous years, and the commitment will give us a leadership-level share-of-voice across our expansion markets,” Schneider says. “While the campaign is regional, if scaled nationally, media spend alone would exceed $16 million.”

The centerpiece is a TV spot (below), in 30- and 15-second versions, that spotlights the brand’s Southern heritage,  homemade taste and signature recipes that use fresh cream, with no artificial growth hormones, from the Tennessee-based Mayfield Dairy.

The spot features third-generation family member Scottie Mayfield, who began working at the creamery when he was 11 and has served as the brand’s spokesperson for decades.

The ad launched today and will air in markets including Charlotte, Raleigh, Greensboro and Wilmington, N.C.; Charleston, Columbia, Greenville-Spartanburg and Myrtle Beach-Florence, S.C.; Savannah and Augusta, Ga.; and Birmingham and Montgomery, Ala.

In addition to a packaging refresh to reflect its name reversion, the Mayfield Creamery brand, which previously shared a Web site and social channels with the Mayfield Dairy, has launched its own site and Facebook, Twitter and Instagram channels.

The social channels will be used to share product news and local events information in the brand’s markets (e.g. “Mayfield Night” at Frisco Rough Riders stadium in Dallas on May 18), and help elevate brand awareness in new markets.

“Very precise” digital advertising is also being used to raise awareness in the new markets, reports Schneider. The brand is working with partners that can “leverage sophisticated location targeting to drive to specific stores where Mayfield is sold.”

Digital OOH ad units (billboards, malls, office buildings, movie theaters) and an Ibotta campaign with a cash rebate are also in the mix.
In addition, public relations programming and shopper marketing and in-store promotions efforts will reach across the brand’s new and legacy markets.