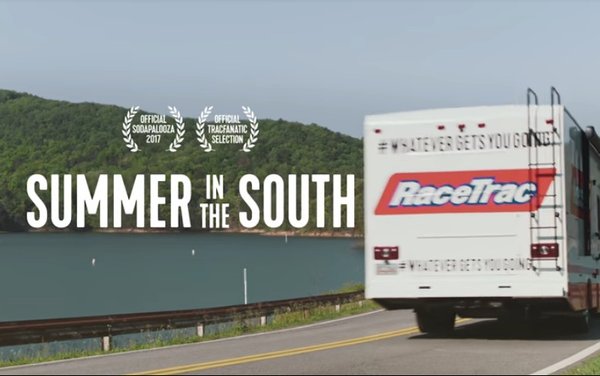 When it comes to keeping cool in the summer, RaceTrac appreciates that Southerners know their way around the convenience store’s annual Sodapalooza promotion. But to make the point that the annual event might be a mystery to the rest of the world, the regional retailer is running a mockumentary, with a British filmmaker getting schooled in the South’s sweaty splendors.

Called “It’s Always Summer in the South,” the campaign is its biggest summer effort yet and focuses on a RaceTrac employee and the non-southern film crew taking a road trip.

RaceTrac, which has about 500 stores in Florida, Georgia, Louisiana and Texas, and has made a tradition of its annual Sodapalooza effort: Customers pay $11.99 for a limited-edition plastic cup, then get free refills of cold drinks through the end of July.

“We wanted to do something different this year,” says Jonathan Woytek, executive creative director at R/GA Austin, which created the campaign. “Summer is an important season for all C-stores, and we concentrated on what makes RaceTrac different from competitors like Wawa and QuikTrip—its regional footprint in the south. And who knows summer better than Southerners?”

With a budget that includes cinema ads, RaceTrac created a mock-trailer for the spot, starring the fictional Basil Crisp as he tries to keep cool in the heat while learning about the South.

RaceTrac also prides itself on employee hospitality, “which is another tradition rooted in the South,” he tells Marketing Daily. “So we wanted to have fun with this employee enlightening an outsider. We wanted to be a little comedic, without making fun of the outsider.”

Different videos are scheduled to promote Swirl World, a promotion focusing on its ice cream and toppings bar.

Besides the obvious metrics of selling out of the Sodapalooza cups more quickly, he says RaceTrac hopes the campaign will also generate greater foot traffic and change brand perceptions.

1 comment about "RaceTrac Welcomes Summer With Mockumentary".
Check to receive email when comments are posted.
Next story loading