Fox's Marchese: Can You Hear Me Now? -- Gets Upfront Attention With, Well, Attention 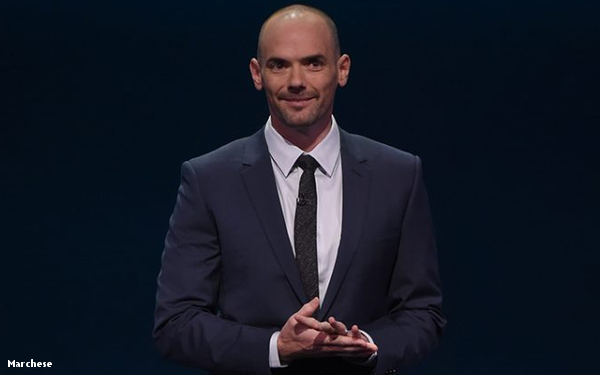 Just three days into his new job as president of advertising sales at Fox, Joe Marchese opened the network group’s upfront sales presentation in New York City Monday afternoon in a way that was bound to get every ad exec and media buyer’s attention.

"Consider this," Marchese told attendees, noting, "we as an industry have done studies to demonstrate that having the sound on is a more effective way of delivering your commercials."

“Seriously, let me repeat that…,” he added, at which point the audio on the loudspeaker system went mute and all you could hear was laughter from the audience.

“…and that is the secret to the future of advertising. And tomorrow’s winning lottery numbers,” Marchese concluded as the audio came back on, sparking an ovation from the audience.

Sight -- and audio -- gags aside, Marchese’s main point is that Fox is not your father’s network group and this wan’t your old-school network upfront presentation, which ordinarily focus on prime-time star power.

The star of Marchese’s cold opening was human attention, and how Fox plans to deliver, measure and prove it going forward.

“Technology has given people infinite choices on how to spend their attention,” Marchese explained, adding: “But we as an industry get slowly left behind because we think about trading impressions, instead of attention. Even as the definition of attention drifts further and further from anything resembling attention.”

Marchese, who has championed attention- and time-based metrics throughout his career -- as founder of True[x] before selling it to Fox, and during his time as head of advanced advertising at the Fox networks group -- described how the advertising marketplace is approaching a “sub-prime crisis,” a theme he originally began articulating as a columnist on MediaPost’s Online Spin years ago.

“Advertising sub-prime is represented by non-viewable ads and unsavory content entering our ecosystem. All compounded by ad blockers, DVRs and growing ad-free options. These allow people to dictate their attention to us,” he continued, promoting Fox’s solutions:

1 - "Focusing on the metrics that matter."

The biggest news of his speech was echoing a similar announcement made earlier in the day during NBC Universal’s upfront by head of sales Linda Yaccarino, who along with Fox’s Marchese, pledged to guarantee advertisers attention-based audience impressions utilizing Moat’s quality video data.

Importantly, Marchese said it wasn’t just using Moat for Fox’s digital audience impressions, but also has a plan to bring “it to linear measurement, as well.” He did not disclose how that would happen, but he said the new attention-based metrics, combined with Fox’s innovative attention-based ad formats, would enable advertisers to effectively hedge the subprime ad marketplace much in the same way that savvy hedge investors beat the housing market, as chronicled in Michael Lewis’ “The Big Short.”

“The common goal,” Marchese promised, would be “an improved viewer experience with outsized returns for you.”