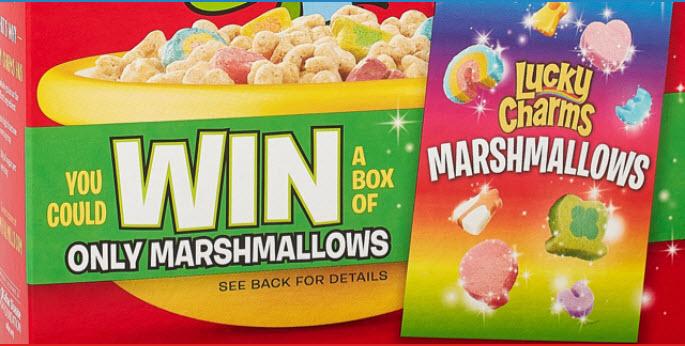 For most lovers of super-sweet Lucky Charms, the main attraction has always been those twee, charm-shaped marshmallows — what General Mills calls “marbits.”

So in a bid to drive those sweet-toothed consumers into stores to snap up more boxes of Lucky Charms, the General Mills brand is running a sweeps to give away 10,000 boxes that contain just the marshmallows.

Entering the sweeps requires buying one of the specially marked boxes of regular Lucky Charms with codes inside (or requesting free codes from the brand, per the rules) and inputting the code in the promotional site to find out if you’ve won. Winners will receive their boxes in the mail within a few weeks.

The promotion is an expanded version of one run by the brand in 2015, in which just 10 of the marshmallow-only boxes were given away.

Since then, Lucky Charms fans have “overwhelmed” the brand with calls, emails and tweets asking for more of the marshmallow-only boxes, according to the brand’s senior marketing manager, Priscilla Zee.

Lucky Charms is promoting the sweeps, which will run through December this year, on its Facebook, Twitter and Instagram channels. It’s also encouraging fans to post “confessions” about wishing for more marshmallows, using #itwasus.

According to Lucky Charms’ nutrition label, the regular cereal contains 10 grams of sugar in a 27-gram (roughly one cup) serving. The Dietary Guidelines for Americans recommend consuming less than 10% of daily calories in added sugars. The American Heart Association recommends limiting added sugars for kids ages two through 18 to a maximum of six teaspoons (25 grams) per day, and avoiding all added sugars for children under two.

In 2015, Vocativ reported that by its calculations, the marshmallows-only variety of Lucky Charms appears to be “no worse than some of the other popular cereal options” (such as Cap’n Crunch and Fruit Loops) when it comes to added-sugar content. In fact, marshmallows only Lucky Charms “might contain less sugar than a regular bowl of Lucky Charms,” Vocativ estimated.