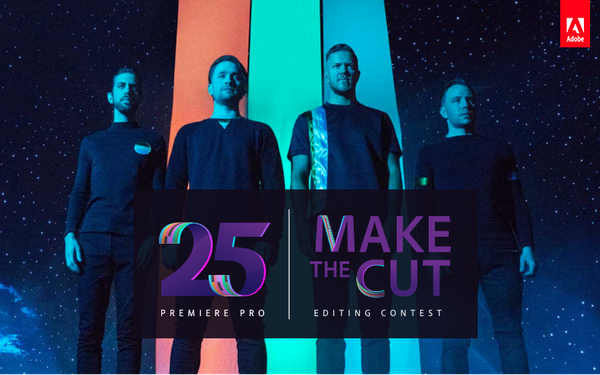 A product’s 25th anniversary only comes around once (and for many, never), so you might as well do something big. For the 25th anniversary of Adobe’s Premiere Pro video editing software, the company teamed with the band Imagine Dragons for its “Make the Cut” contest, encouraging users to recut the band’s video for the hit song  “Believer.”

The brand (and the band) gave consumers access to the video shoot’s raw footage (which featured Rocky IV’s Dolph Lundgren in a futuristic boxing match) and challenged them to create their own version for a chance to win $25,000. Adobe CMO Ann Lewnes spoke with Marketing Daily about why an effort that she concedes has a “high barrier to entry” (the average video edit takes about 20 hours) was the right one for the brand.

What was the premise behind the “Make the Cut” contest?

This year we are celebrating the 25th anniversary of Premiere Pro, and we wanted to do something fresh and engaging. What we found is the best way to get people engaged is to actually involve them in a creative project. We were looking at how can we have a great piece of creative that our customers could dig their teeth into.

How did you go about convincing Imagine Dragons to be a part of this?

They’re a very creative band. They were excited about doing it. You need a partner that’s excited about doing it so that they’ll hype the project at the same time. In fact, the band has been engaged in looking at the actual submissions. It’s a very artistic, conceptual video. It lends itself very well to this kind of a project.

Is there a cross-connection for Imagine Dragons and your users, or was it simply the opportunity?

What we found was that a lot of young people were very excited about this project. We received 9,000 entries — and we didn’t know what to expect — that came from 28 countries, and 60% of the entires were from people under the age of 25. For Adobe, that’s an audience that we really want to reach. This was a fantastic opportunity to get in front of young people and get them engaged with the brand.

Knowing that the time investment in making a video is so great,  how did you determine this would be good for the brand?

I think the people who participated are creative and want to get their work out there. And there’s an opportunity to reach a broad audience to participate in this. There’s also a cash prize, which makes it appealing. We knew that Imagine Dragons would be a draw, but I think we were surprised by how many people were willing to create a great piece. That takes a lot of time.

What do you expect to happen to these videos post-contest?

Certainly, for the winners, this is something they will use as a key part of their reel. Making Premiere Pro relevant to a young audience was one of the goals of this, and we obviously accomplished that. The top videos will get a lot of recognition. And the rest of the work was good. Even if it wasn’t prize-worthy, they can put it on their reels. They can say they actually cut raw footage from a big band into a music video.

How does this reinforce the brand?

[The entrants] had a great experience with the product and when you see the work, you’re able to see what they can do, [particularly] the embellishment and creativity and originality they were able to bring to the raw footage. When you see what they can do with our tools, hopefully [others] will want to do this do. They really did an outstanding job getting the most out of Premiere Pro.

[This interview has been condensed and edited for flow and clarity.]