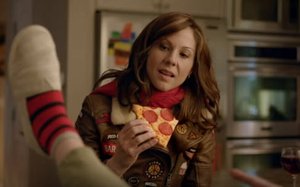 As the centerpiece of a rebranding push targeting working moms, Red Baron pizza is introducing a female counterpart to its namesake male brand character, called “the Baroness.”

The brand says that the Red Baron is “stepping aside” after 40 years to make way for the new audience targeting strategy and a new “voice” to support it.

The multi-year marketing campaign — a major directional shift for the nation’s second-largest frozen pizza brand — takes a humorous approach to celebrating working mothers that was informed and created by members of the target audience, according to the brand.

The research confirmed that women feel that smart, relatable female brand characters are all too scarce, particularly in the CPG categories that are shopped by most frequently by women.

“We listened to a lot of moms — friends, consumers, team members — who didn’t see themselves in a lot of the picture-perfect moms usually portrayed in TV and advertising,” said April Anslinger, chief growth officer, Schwan’s Consumer Brands, Inc., who is herself a mom.

The Baroness character is a working mother who wears a bomber jacket adorned with badges earned by acing the roles and battles that moms face each day, such as “Tantrum Slayer” and “Clean Plate Club.” Other badges bear “mom-isms” like “Nailed It” and “Whatever Works.”

The character “understands that parenting doesn’t always mean perfection,” and “speaks to busy moms as only another mom can — by finding humor in the often-hectic moments of motherhood, and by sharing patches to remind moms just how well they are doing, every day, even when they don’t realize it,” said Anslinger.

The Baroness was created by a team of working moms (who felt like smart, relatable women were missing from the abundance of brand characters in advertising and marketing — especially within the consumer packaged goods space — a category shopped most frequently by women/moms.

The Baroness was unveiled in a 30-second online spot (below) — which will start airing nationally on television in July — in which she swaps mom “war stories” with Kristin Hensley, star and co-creator of the popular Web series #IMomSoHard. The character presents Hensley with a badge for accomplishments including mopping up spilled milk with a sock and continuing to wear it (above) — and serving Red Baron, resulting in her family finishing their entire dinner willingly.

Hensley and her family will also interact with the Baroness in other new advertising creative.

Beyond the videos, the brand will encourage moms to share them as “symbols of support and empowerment.” Red Baron will offer patches through “surprise and delight” efforts, including creating personalized versions for moms who share their war stories in real time using #WingMama, and through influencer partnerships with real moms wearing and sharing their patches.
The character has her own Facebook and Twitter accounts to foster ongoing interaction with moms.

The campaign will also include custom media content through Romper.com and People.com, and influencer, public relations and shopper marketing elements.