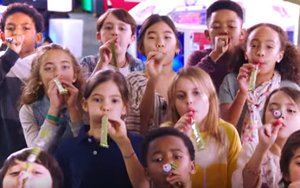 To promote its 40th anniversary, Chuck E. Cheese, the birthday party destination of choice among many in the under-12 set, is aiming to set a Guinness World Record for the most people simultaneously blowing party blowers.

The chain will host party-blower record attempt events at locations around the country on May 19, offering kids in attendance a free slice of cake (as long as the 120,000 slices available hold out).

Consumers who make a $5 food purchase at one of the locations (between April 10 and May 19) are receiving 40 free tickets per kid.

They can also upload their receipts at www.40YearsOfFun.com to enter for chances to win a VIP party worth $500.

Chuck E. Cheese is encouraging fans to post snaps of their own celebrations at the restaurant, using #40YearsOfFun, on Twitter or Instagram for a chance to have them posted in its 40th Fun Wall online gallery.