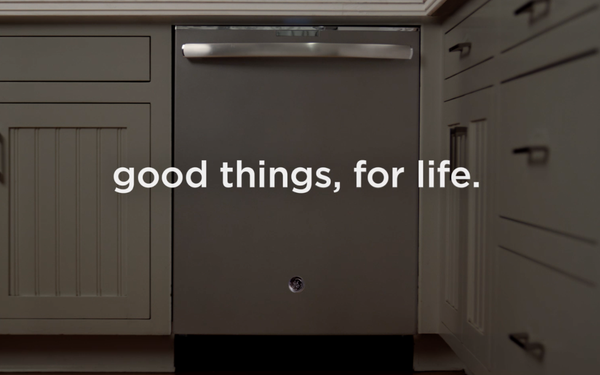 Life in the connected home and the Internet of Things may be changing, but that doesn’t mean GE Appliances can’t still bring good things to it.

The brand (which was acquired last year by Haier) is set to launch a new campaign featuring its connected appliances and a new tagline, “good things, for life” (an update of the brand’s familiar line “We bring good things to life.”)

“We’re committing not only to building long-lasting products but [also to] our brand promise of fitting within a lifestyle,”  Rick Hasselbeck, GE Appliances chief marketing officer, tells Marketing Daily. “This is a campaign and a line that we’re going to keep for awhile. We’ve spent a lot of time with consumers, and we know this line and experience resonates with consumers in a good way.”

The new campaign, from agency BBDO, features humorous slice-of-life vignettes, such as a dinner party guest using a salad fork to scratch his back or a woman who has been preparing a raw chicken and is being very careful not to touch surfaces to spread possible contamination asking Amazon’s Alexa to preheat her oven. Introduced by a GE technician, the spots are intended to showcase how the appliances new features fit into the modern world.

“It’s what consumers are experiencing each and very day,” Hasselbeck says. “When [depicting] these real-life experiences, there’s a lot of ways these connected devices can help to de-stress.”

The campaign will launch during the Billboard Music Awards on May 21 and will run in a variety of live event programming including the season premiere of “The Bachelorette,” the final episodes of “The Voice” and “Dancing With The Stars” and the Tony Awards. “We know that’s when people are watching more and experiencing more,” Hasselbeck says of the media choices.