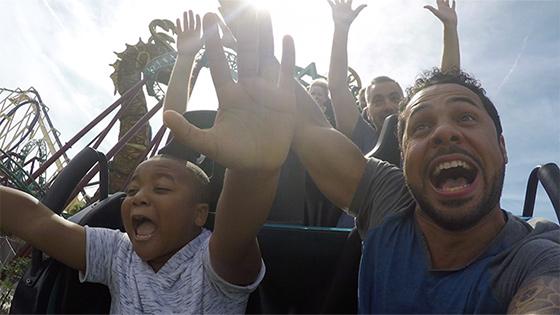 Google “Florida Man” news entries and you’ll find pages of gross, tragic and just plain bizarre “clickbait”-type headlines. Just this week, a Florida man tried to kiss a rattlesnake and (surprise!) was bitten on his tongue. He was in critical condition as of two days ago.

“Florida Man” headlines are widely used clickbait for many media outlets. But now, a Big Brothers and Sisters group in the state, along with its agency, has developed a campaign to turn what’s become something of a pejorative cliché into a positive awareness driver for the organization.

The pro bono initiative piggybacks on actual trending “Florida Man” headlines, such as “Florida Man Attacked With Can Opener,” but with video that shows a boy playfully leaping into a pool—can-opener style—and splashing his Big Brother.

Another headline featured in the campaign: “Florida Man And Boy Struck By Lightning! Caught On Phone!” The accompanying video (seemingly captured on a smartphone) shows a boy and his Big Brother whooping it up at a Florida Lightning hockey match.

The spots end with the tagline, “Be the man that makes Florida proud. Be a Big,” followed by the group’s logo and Web address.

The campaign utilizes donated native media. "Since the media placement is part of the concept, we wanted the ads to run where people would normally encounter 'clickbait'," says Matthew Zaifert, creative director, 22squared.

The ads are geo-targeted to men in the Tampa region. Additionally, the messages piggyback on trending “Florida Man” stories by replying in the comments section where these stories organically appear in social media.