On A Hot Streak, New England Cranks Up Its Charm 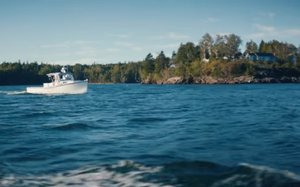 From rustic Vermont villages, Boston’s hip arts scene and mountain views in Maine, New England’s various marketing machines are out to catch as many summer tourists as they can.

That includes intensifying efforts to win attention from overseas. Discover New England, a nonprofit marketing cooperative that focuses solely on international prospects, says that while other U.S. destinations may be reporting a “Trump Slump” among foreign travelers, business looks solid for the months ahead.

“We have not seen any indication of a slowdown,” says Lori Harnois, the group’s executive director. “New England is considered a safe, authentic U.S. destination,” she says. Last year saw record overseas visitor arrivals, topping 2.1 million, a 68% increase from 2002. Core markets continue to be the U.K. and China, as well as Germany and Japan. Last year, it also stepped up marketing in Australia and New Zealand.

But the region still plays second fiddle to places like New York, Las Vegas and Florida. “Typically, the person who visits New England has visited the U.S. once before,” she tells Marketing Daily. She says it has broad appeal for both families and couples, who especially like that the area combines beaches and mountains with Boston’s urban offerings.

And each of the region’s six states has its own marketing campaigns and is also hoping to attract more visits. Maine, which spends about $11 million in marketing, brought in 36 million visitors in 2016. That includes 5 million first-timers, as well as a major surge in Canadian travel, and in part, was buoyed by the 100th birthday of Acadia National Park, one of the country’s busiest. Since 2012, visits to Maine have climbed 30%. This year, it’s trying to do even better, with a new marketing campaign it hopes will encourage people to see Maine as a lifestyle more than a destination. Themed “This is Me,” it includes TV, print, and a redesigned website, as well as out-of-home.

Connecticut is making convenience a big part of this year’s message, positioning itself as a destination that gives tourists “a mix of activities and attractions, all close to each other,” says Randy Fiveash, director of the Connecticut Office of Tourism, “whether it’s exciting or relaxing, historic or innovative, culture or nature-focused.” Themed “Connecticut still revolutionary,” the campaign highlights specific attractions. (Adams & Knight, based in Avon, Connecticut, is the agency.)

While measuring visitors is tricky, since so many drive in, he says that hotel bookings and Web site visits indicate a strong season. “Our location between major U.S. cities makes it quick and easy for New Englanders and others to travel here,” he says. “If our online engagement is any indication, it should be another banner summer.” Visits to its site are up 64% and he says interest in culinary tourism, including local wines, is especially hot.

Vermont, meanwhile, is running a campaign called Two Fifty-One, which makes the case that all 251 of the Green Mountain State’s cities and towns are worth a visit. A spokesperson says all creative is done in house, and that this year, it’s using traditional outdoor, digital, native and online travel agency programmatic placements. Despite all its ski resorts, summer is Vermont’s busiest season, and this year, it expects to host more than 5 million visitors.