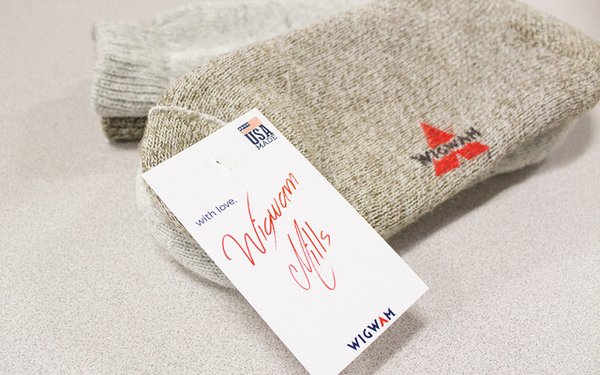 Wigwam Socks wants to get a few steps closer to becoming a zero-landfill company and will to warm a few more feet in the process.

The Sheboygan, Wisconsin-based mill -- which has been knitting socks since 1905 -- says the new effort focuses on reject socks, tossed on the floor by quality-control inspectors. The idea started when new CEO Tom Wheeler challenged himself to pick up random socks and see if he could discern what the defect was. He usually couldn’t.

That has led to a new recycling center that collects some 2,000 pounds of irregular socks that the mill generates each month, then inspects, sorts and pairs them, says Luke Otten, the company’s marketing communications manager.

So far, it isn’t pushing the availability of the socks out to charities. “Socks are such a big thing and so important to people in need that we’ve been able to give them away just from requests that shelters make with us,” he tells Marketing Daily.

But he says the company, which is readying a new ad campaign to break next month, is pushing the news about these rescued socks through its sales channels.

Otten says its moves are driven by the core values of its Made-in-the-U.S.A. brand. “The people who believe in our products love the outdoors, and they’re out there trying to live in these beautiful natural spaces. We want to look at the big picture, and come full circle in sustainable outdoor recreation.”

Wigwam is just one in the growing list of companies striving to become zero-waste manufacturers, led by U.S. brands like Timberland and Patagonia. But

those earning highest marks for efforts to reduce waste are typically European, including H&M, Marks & Spencer, and Adidas.

Apparel manufacturing remains a problematic industry for sustainability efforts. “Consumers keep their clothing for half the time that they did 15 years ago and after use, a majority ends up in the landfill,” says H&M, in a recent release announcing its support of the new Circular Fibres initiative, which aims to create changes throughout the apparel ecosystem. “This characteristically linear economy puts high demand on land, energy and other resources.”