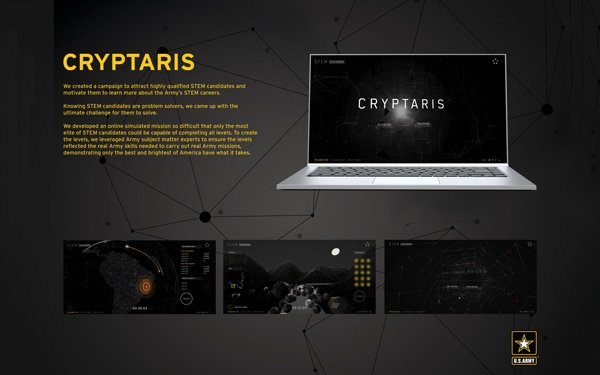 Challenge: Our challenge is to arm America’s all-volunteer defense force with candidates who can take on the most complicated challenges that currently threaten our nation. From cyber terrorism to outbreaks of disease and infrastructure failure, the challenges facing today’s Army demand brainpower more than firepower. The U.S. Army needs to attract candidates with skills in science, technology, engineering and math (STEM) who can adapt to these new front lines.

Solution: Knowing that STEM candidates desire, above all else, attending elite universities, we needed to make the Army part of their consideration set. Thankfully, we had a compelling case to make. Not only can you earn a degree at almost any university while serving in the Army, but you also gain real world exposure to the nation’s toughest STEM challenges. Simply telling this to STEM candidates would not suffice. We found that candidates are most attracted to schools with the lowest admission rates like Stanford, Yale, Columbia, Princeton, MIT and Harvard—each of which accepts less than 7% of applicants. Given this insight, we created an experience with equally low acceptance rates.

We developed an online simulated mission so difficult that only 5% of users would be capable of completing all levels. It was called Cryptaris Mission. The experience was created in WebGL and integrated multiple Google technologies. Army Subject Matters Experts & the Army Marketing Research Group worked closely to ensure each of the seven levels reflected real Army missions and the STEM skills needed to win.

Results: Millions visited the site to engage in the Cryptaris challenge. To date, only 0.15% of users have been able to complete all seven missions. The high rejection rate generated a plethora of user-generated content. The U.S. Army was being discussed in places it had never been talked about before. With over 4,000 site link shares on Facebook, users began to create their own content on Reddit and YouTube, videotaping their experiences and trading game tips with their followers. But most importantly, thousands went on to learn more about STEM careers in the U.S. Army.