More TV advertisers have now abandoned Fox News’ “Hannity” show because of a discredited story about killing of a Democratic National Committee staffer with regard to leaked emails.

Show host Sean Hannity has been pushing a conspiracy theory about Seth Rich, the Democratic National Committee staffer who was killed in Washington, DC, last year, on his TV and radio shows. According to the theory, Rich's killing was ordered by the Clintons in retaliation for leaking DNC emails to WikiLeaks.

Police have said his death was the result of a robbery gone wrong.

Earlier this week, Fox News Channel retracted and removed from its site a speculative story about the 2016 murder of DNC employee Rich. Fox said the story "was not initially subjected to the high degree of editorial scrutiny we require for all our reporting."

Hannity has now said he will no longer discuss Seth Rich “out of respect for the family.” But Hannity also has said he has “retracted nothing.”

Cars.com issued a statement: “The fact that we advertise on a particular program doesn’t mean that we agree or disagree, or support or oppose, the content. We don’t have the ability to influence content at the time we make our advertising purchase. In this case, we’ve been watching closely and have recently made the decision to pull our advertising from Hannity.”

Some advertisers in the show have been shifting their advertising buys into other Fox News Channel shows.

A Fox spokesperson did not respond to a request for comment at press time. 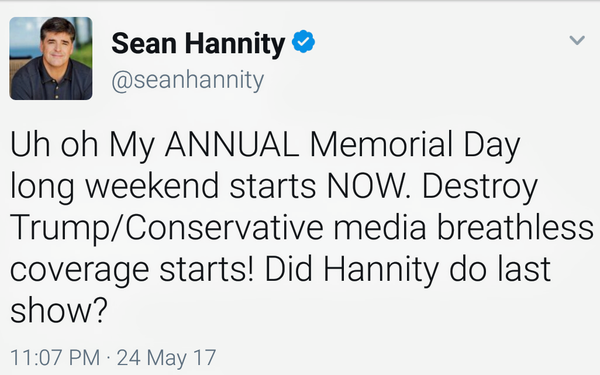