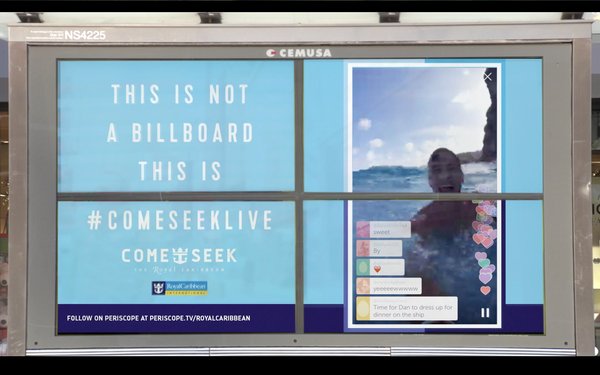 Challenge: In 2015, Royal Caribbean recognized that US growth rates had slowed relative to key international markets. This was primarily due to decreased growth among first time cruisers.

We, therefore, made the bold decision to quit fighting amongst the category for repeat guests and instead court a new and younger never-before-cruised audience. The benchmarks for success would become new to cruise sailings, which had not grown in six years.

A key barrier to attracting this new audience, however, were the widespread misconceptions about the cruise experience. Stereotypes and the perception that cruising is a one-size-fits-all vacation were all things we needed to combat. We needed to show them a whole new way to cruise that fit their need for discovery and exciting new experiences.

Solution: In order to defy category perceptions, we needed to be authentic and demonstrative. So we created a first-of-its kind interactive execution that connected the breadth of outdoor in NYC with the Livestreaming nature of Periscope.

We sent five adventurous social media influencers, relatable to our young prospects, on a Royal Caribbean vacation. For seven days, across five islands, onboard Royal Caribbean’s newest ship, Anthem of the Seas, our influencers Periscope’d 22 broadcasts. We beamed these live across 86 outdoor screens throughout New York City.

We created technology that would harness the cellular strength needed to livestream from remote locations and created custom connections that would support and display live video across two ubiquitous outdoor networks in the city.

We converted the traditional eight-second digital outdoor exposure-loop to the first-ever 15-minute live broadcasts of stereotype-shattering excursions, unfolding during the morning and evening commutes.

Tapping into our influencers’ social followings and promoting the live streams through Twitter, we expanded our reach and increased engagement outside of New York.

We enabled audiences to take part in the adventures and direct the influencers’ entire trip via real-time comments on Periscope. They could decide what our influencers would do at every step of the way: From where they went hiking in Puerto Rico to going head or feet first down a natural rock water slide, we intercepted and invited hard to convince and skeptical New Yorkers to #ComeSeek and demonstrated exactly what they could be doing RIGHT NOW on a Royal Caribbean cruise.

Results: In NY, Social sentiment for the brand increased 23% compared to the 2015 historical average, representing the largest and most sustained lift since measurement of this metric began in 2014. We also saw a 19% lift in consideration YOY during Q4 2015; establishing a 34% lead over the competition during the same time period.