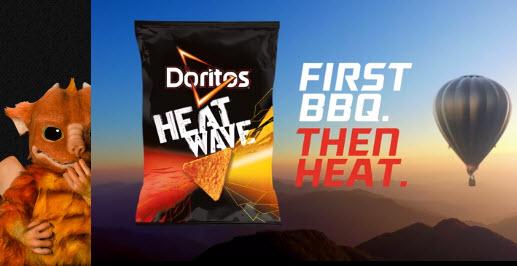 Doritos, which seems to be an endless font of new flavors that play off of its “For the Bold” brand slogan, is launching limited-edition HeatWave varieties in the U.S. for the summer.

Introduced earlier this year in the United Kingdom under a slightly different name (Heatburst), HeatWave’s shtick is that it delivers two different “bold flavor sensations.” The consumer initially tastes one of the two flavors available, BBQ or Chipotle Cream; that is followed by a surge of heat, as mini-chili capsules burst as the chip is crunched.

The initial marketing in the U.S. will include an aerial show and sample drop on May 31, to take place over Duluth, Minnesota — the premise being that Duluth, which has recorded among the coldest Memorial Day temperatures (55 degrees), could use a “HeatWave Drop.”

At noon CDT, two branded helicopters will deliver hundreds of bags of the new variety, as a professional aerial stuntman performs. A video of the event will be available on the brand’s Facebook page starting June 5.

Doritos is also promoting a 30-second video/TV spot on a site dedicated to HeatWave. The creative — from AMV BBDO and PepsiCo — features a cute baby dragon character that innocently sets objects aflame in its excitement over sharing various activities with its human "parent." The message is that eating HeatWave chips is sort of like finding a baby dragon on your doorstep: “At first, it’s all joy — but soon, things are gonna heat up.”

Essentially the same creative, save the different name, was used in a two-month TV campaign in the U.K.

The brand is also promoting a HeatWave sweepstakes on the site. Consumers may enter in any of three ways: By creating a GIF by adding Doritos-supplied dragon stickers and filters to their profiles pictures; by using their phones to scan a HeatWave bag; or by entering a code from a HeatWave bag on the site.

Prizes include a Hawaiian volcano trip, and branded items such as tumblers, tee-shirts and noise-cancelling headphones.