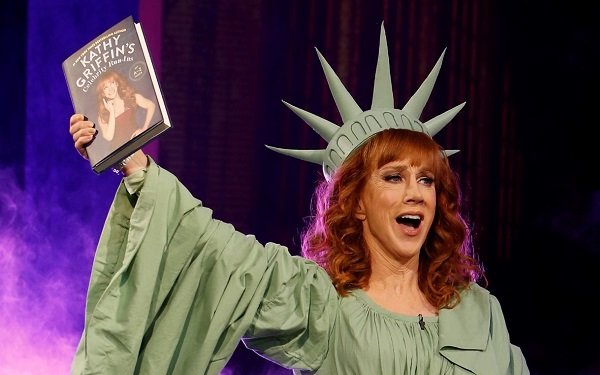 It might seem reasonable to ask “What was she thinking?” in the aftermath of all the trouble Kathy Griffin stepped into with the video and photo she created in which she brandished a facsimile of Donald Trump's bloody, decapitated head.

But the question has no answer because she wasn't thinking. Her act was the very definition of the word “thoughtless.” At the very least, she must have given little or no thought to the possible outcome.

If nothing else, Kathy Griffin is a shrewd celebrity. She is not accustomed to public outcries and she evidently never saw this one coming -- at least not one this vociferous. She is much more accustomed to receiving accolades for the outrageous things she says and does. So it was on with the photo shoot, and consequently, off with her head.

However, what if she really had stopped and thought about it? Given the current state of discourse in this country, she might have concluded: What the hell? Anything goes today, right? Pictures of me brandishing the president's severed head? At least half the country will cheer me on. Let's go for it.

Coming under scrutiny from the Secret Service for this possible threat to the president was probably the last thing on her mind. So was the possibility that CNN wouldn't invite her back to celebrate New Year's Eve with Anderson Cooper next December.

Give CNN credit for coming to its senses and giving her the axe. “CNN has terminated our agreement with Kathy Griffin to appear on our New Year's Eve program,” the news channel tweeted at around midday (Eastern time) on Wednesday. Will wonders never cease?

A short time later came a tweet from Cooper himself. “For the record, I am appalled by the photo shoot Kathy Griffin took part in. It is clearly disgusting and completely inappropriate,” Cooper tweeted in an obvious effort aimed at suddenly distancing himself from a person whom for years he has portrayed on New Year's Eve as a dear friend.

In response to the comments blasting her on social media, Griffin released another video in which she adopted a grave expression on her face to apologize. “I am sorry. I went too far. I was wrong,” she tweeted along with this 30-second apology video. She shot the video with no makeup, perhaps in a bid to persuade everyone who watches it just how serious she is.

However, anyone who has followed Kathy Griffin's career for many years might conclude instinctually that she doesn't mean a word of it.

Only she knows for sure if she regrets this decapitated-head stunt or not, but many will simply assume she produced this apology video not out of any real remorse but as an attempt at damage control.

These things even work at persuading some people less cynical than me that Griffin is sincere in her regret for what she did. I even came across a column posted on the Washington Post Web site in which the writer actually bought this malarkey. He called the apology “genuine” and said she “deserved” to be forgiven. Incredible.

Forgiveness is a great thing, but Griffin herself is not a forgiving type when it comes to her jabs at other famous people that are a staple of her stand-up act. It is doubtful she would be forgiving of someone else who pulled a similar stunt with, say, a bloody head of Hillary Clinton.

Naturally, this bloody-head incident was a big topic on social media, where the juvenile jury weighed in, as usual. “I was repulsed by the Kathy Griffin vid,” wrote one Twitterer whose opinion nobody asked for. “That said,” this Twitterer continued, “CNN fired HER, but HIRED Lewandowski after he assaulted a reporter and lied about it.”

“You can put lipstick on a pig. But, it's still a pig,” went another Tweet, accompanied by photos of Griffin wearing lipstick (presumably).

“If you have no problem voting for a guy who brags about sexual abuse & mocks the disabled then u shouldn't have any problem with Kathy Griffin,” wrote another Tweeter in support of her.

And so it went: Just another day in USA Land, where each week brings some new outrage for thousands to foam at the mouth about, post their displeasure on Twitter and then resume their lives. “Kathy Griffin should be ashamed of herself! …,” someone might tweet in the morning over a fresh cup of coffee, followed by another random thought: “I wonder what I should have for lunch today?”