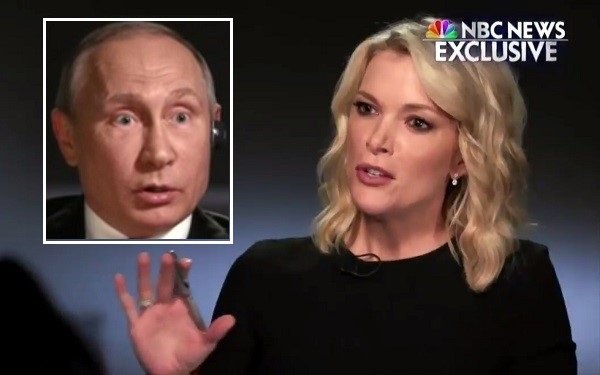 Vladimir Putin made mincemeat of Megyn Kelly, and then later in her debut show on NBC, we were treated to a bunch of cute kiddies saying the darndest things.

If both of these segments had anything in common, it was this: They both involved critiques of the very American news media that spawns people like Megyn Kelly.

The Putin interview was the big “get” that was supposed to be the rocket fuel that would boost this former cable news star into broadcast-television orbit.

Instead, the premiere episode of “Sunday Night with Megyn Kelly” had her getting lectured by Putin about the nature of U.S. news media.

He clobbered her. He was so effective that you couldn't help acknowledging that he had a point.

For all we know, Kelly asked Putin about all sorts of subjects other than the current probes into allegations that Russia meddled in the presidential election last year with his knowledge and approval. As Putin himself said during the show, the two had been “working together” for the better part of 48 hours.

Perhaps she asked him a whole host of questions that might have helped viewers to better understand modern Russia and Putin himself. To most of us, he’s a very inscrutable guy. We wanted to learn more, but we learned nothing.

The exchanges that made it to air for the segment that aired Sunday night were all about Megyn “challenging” Putin over the American election issue.

The strategy here seemed to be to generate headlines and other bits of pre-show publicity for the revelations that Kelly would pry from the canny Russian president. The problem was: There weren't any.

Instead, Putin repeatedly denied his own, and his government’s, involvement in the election scenario that everyone is investigating these days. In the process, Putin turned the tables on Megyn with his lecture about the obsessive nature of U.S. journalists and news media.

“For me, this is just amazing,” Putin told her. “You [meaning U.S. news media] created a sensation out of nothing. And out of this sensation, you’ve turned it into a weapon of war against the current president.

“Well this is … you know … you're just … you people are so creative over there. Good job,” he said dismissively, with obvious sarcasm. “Your lives must be boring.”

Only the show's producers know what ended up on the cutting-room floor, but one thing we didn't see (if it existed at all) was Megyn's follow-up question (or statement) to Putin after he insisted that the involvement of American intelligence services in the assassination of President Kennedy in 1963 was a legitimate scenario well worth examining.

In other portions of the interview, Megyn was quick to point out that American investigators such as the FBI have concluded that Putin knew about, and was involved in, Russia's alleged meddling in the election.

But she never once pointed out that theories about CIA involvement in JFK's assassination are the kind of thing that most normal people in America consider to be loony, along with the conspiracy theorists who obsess about scenarios like this.

Elsewhere in the Kelly show on Sunday, Cynthia McFadden had a report on a powerful, legal prescription painkiller that might be killing people. It was a great story, but from a journalistic standpoint, if this story and other stories like it are so important, then why do these networks always wait to air them on an upcoming “magazine” show like this one?

Don't the rules of journalism dictate that you put news on TV or online or in print as soon as you have the story? Why don’t these rules ever apply to TV news? Well, that's because “TV news” is often not really “news.”

It's entertainment, even when it's serious in nature. The deciding factors are all about scheduling and packaging, not providing information that might be helpful to people.

Later, Harry Smith reported on an American woman who is helping Kenyans fight elephant poachers. She was an interesting personality, but the story took the gender-focused point of view that women are leading the fight against elephant poaching, as if this battle is something women are engaged in more than men. To me, the gender of this anti-poaching activist was irrelevant. But positioning TV news stories in gender terms is what sells these days, apparently.

Before the hour was over, a group of small children weighed in on the subject of incivility, as illustrated with numerous clips of talking heads arguing on the news channels. This was the stupidest waste of time in the whole hour. At least Megyn seemed to enjoy it, even while a critic watching at home made this note: Why on earth are they doing this?