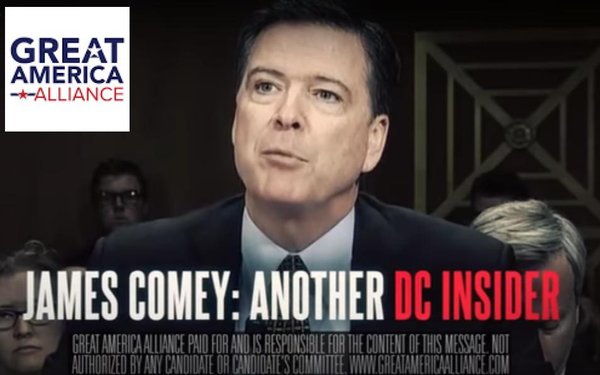 In what appears to be a political media first, a Super Pac controlled by President Trump has released an ad attacking the character of a witness in advance of a highly anticipated Senate hearing.

The ad, entitled “Showboat,” was released Tuesday by Trump’s Great America Alliance and attacks the character of former FBI Director James Comey, who is scheduled to speak publicly Thursday morning during a Senate hearing.

The spot, which will air on national TV outlets during the hearing, reportedly has a $400,000 media budget.

Citing alt right news reports such as Breitbart News, American Spectator and AlternNet, the campaign attacks Comey as putting “politics over protecting America” and concludes with the tagline: “Just another DC insider in it for himself.”

“Wow,” MSNBC’s Chuck Todd quipped during a segment analyzing the ad, adding: “Is James Comey running for something?”

“I guess they’re worried about the credibility James Comey has,” Todd continued, adding: “He has more credibility than Donald Trump.”

The Trump Super Pac previously broke a pro-Trump ad entitled “Winning” in April to highlight the new President's accomplishments during his first 100 days, but the Comey attack ad is a first of its kind and comes as Comey’s nationally televised hearing is expected to draw huge audiences, as well as new attention on President Trump.

In an effort to get out in front of that story, Trump announced his nominee for a new FBI director this morning -- Christopher Wray -- who would fill the job that has been vacant since Trump fired Comey in May.