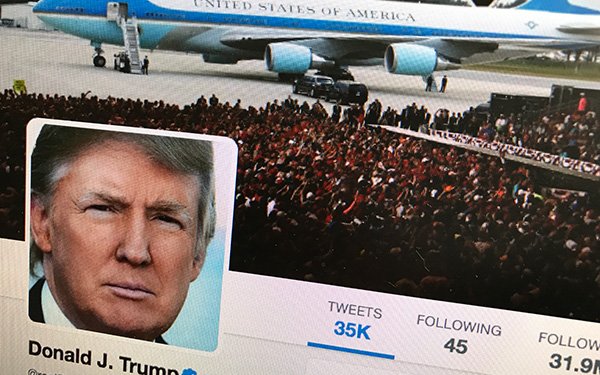 On June 3, President Donald Trump used his personal Twitter account to post a video clip from his weekly address, in which he discussed his recent trip abroad.

The next day, Papp learned he had been blocked from following the president, who tweets under the name @realdonaldtrump."

Theoretically, the move means that Papp can no longer see Trump's tweets, followers, likes or lists -- at least when logged in to the service. People who have been blocked are also restricted from commenting in some threads -- although there are workarounds.

Now, the Knight First Amendment Institute says the block is unconstitutional. The organization, which represents Papp and Holly O'Reilly -- another Trump critic who was recently blocked -- is demanding that the White House unblock the accounts.

"When the government makes a space available to the public at large for the purpose of expressive activity, it creates a public forum from which it may not constitutionally exclude individuals on the basis of viewpoint," the Knight institute writes in a letter to the White House.

"It is plain that our clients were blocked from your account on the basis of their viewpoints," Knight adds. "Each of them was blocked soon after having disagreed with or ridiculed you. Other users appear to have been blocked for similar reasons."

The organization points to several court decisions, including one from earlier this year involving Facebook. In that matter, a federal judge in Virginia ruled that the Loudoun County, Virginia Board of Supervisors may have violated the First Amendment by allegedly deleting critical Facebook comments from a page created by the board.

U.S. District Court Judge James Cacheris in Alexandria ruled last September that Loudoun County's Facebook page may have served as a "limited public forum" -- meaning that people have First Amendment rights to post comments on the page. That lawsuit is still pending.

Internet law expert Venkat Balasubramani, who has written about the Loudoun County lawsuit, says the battle over Trump's blocking of Twitter users could turn on whether the microblogging site is viewed as a public forum -- comparable to city streets or public parks.

In the Loudoun County matter, the county expressly said the purpose of its social media sites was to present matters of interest to the public, and the county encouraged people to weigh in on social media with questions and comments.