Was The Comey Hearing Good TV? I Give It An 8 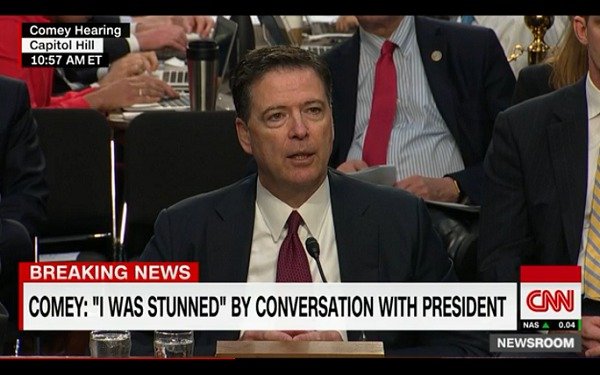 The verdict is clear: James Comey made a persuasive case for charging the President of the United States with obstruction of justice.

On the other hand, no he didn’t.

Oh, well, that’s business as usual in the land of partisan TV news in America. A news event happens, and then for hours on end you get two opposing points of view about what you just saw.

But I'm a TV columnist, not a constitutional law scholar. Come to think of it, very few (if any) of the talking heads and talk-show hosts on MSNBC, CNN or Fox News Channels are legal scholars either. They are experts in something else that is more important, though: Blathering incessantly.

In that regard, Thursday's Comey hearing was like a goose that laid a million golden eggs, resulting in the mobilization of the news channels’ vast armies of contributors, columnists, commentators and consultants.

You knew something big had taken place when you grazed by CNN during the hours after the hearing and saw their panels of seven or eight people -- numbers they trot out only in the event of something really important.

So how was the Comey show? On a scale of one to 10 -- with 10 being great television -- I'd give it an 8, which is to say: This one was pretty good as televised government hearings go.

These can really run the gamut. I remember covering similarly televised governmental and judicial proceedings in the 1990s and early ’00s -- most notably the various televised hearings on President Clinton's impeachment and later the proceedings following the “hanging chad” presidential election of fall 2000.

I remember writing of them that, for the most part, they were pretty dull -- as TV, that is. That's not a judgement about their importance or the wide interest in their subject matter, which fully justified their being televised.

It's just that sometimes these things can be dry and challenging for a portion of their audience to follow, understand and remain interested in.

The Comey hearing on Thursday, however, had a welcome bounce to it as a piece of televised entertainment. Whatever impression of Comey you took away, he had an engaging, almost “gee whiz” manner of speaking that helped keep the proceedings humming along.

Unlike other such telecasts, I found that this “show” kept my mind from wandering. Plus, I never yawned, even once. Among other elements, the pacing was aided by the time restriction placed on each senator.

This may have been why so few of them prefaced their questioning, with windy opening statements about American institutions, our way of life, the Constitution, or any other topic not germane to what we were all tuning in to hear about.

And the hearing was mercifully short. It ran from about 10 a.m. to about 1 p.m. (after which there was a hearing undertaken in private because of certain topics considered classified).

Of course, that hearing might have had much juicier material to take in. However, the part that was televised for us peons certainly gave a heap of insight into how some business is conducted in Washington.

Based on Comey's descriptions of Oval Office meetings and presidential phone calls, you got the feeling that everyone in Washington is on their guard all the time whenever they meet with someone else in power.

They watch what they say, listen carefully to what they’re being told to detect hidden meanings, and wonder if they’re being recorded. It’s like they’re Tony Soprano talking to Paulie Walnuts about “this thing of ours.” Is this any way to run a government?

A quick check of the channels airing this hearing live on Thursday revealed that all the majors were on board, including both Univision and Telemundo, which is not always the case with events like this.

There was an old-fashioned aspect to this telecast too. TV has been airing these kinds of hearings since the beginning of the TV era in the 1950s. They're an old school staple, and it is worth applauding the willingness on the part of network TV execs to preempt their regular shows to air these kinds of hearings once in a while.

It's also true that in today's saturated media world, the TV networks don't really have to do this anymore. I happened to watch the whole thing via live stream on CNN.com with no breaks, buffering or viewability disruptions of any kind. Imagine that -- it was just like television.

news, politics, tv
3 comments about "Was The Comey Hearing Good TV? I Give It An 8".
Check to receive email when comments are posted.
Read more comments >
Next story loading