Interview With Conspiracy Theorist Has Megyn In Hot Water 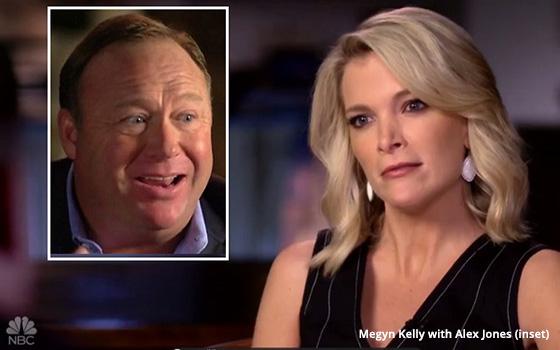 In just her third week on the air, Megyn Kelly has accomplished something that was so avoidable, you wouldn’t think it was even possible.

But Kelly, the new face of NBC News, achieved it anyway. She managed to anger the parents of small children killed in the Sandy Hook Elementary School massacre in Connecticut in 2012.

To accomplish this feat, Kelly interviewed a man named Alex Jones, who is apparently a loony radio personality and conspiracy theorist who bloviates about 9/11 and other terrible events -- providing alternative scenarios to describe what he says really happened.

On the subject of 9/11, he believes the American government was involved in the plot to crash airliners into the World Trade Center and the Pentagon. This point of view is reportedly held by a number of other people too.

Where the unimaginable Sandy Hook massacre is concerned, Jones has reportedly put forth his theory that the entire thing was staged with actors. Until I read about this point of view this week, I had never heard of it before. For all I know, Jones is the only person on Earth who believes this.

Well, that’s his story and he’s sticking to it. Naturally, this upsets parents and relatives of the children and educators who were shot to death on that terrible day.

However, Kelly and her handlers have chosen Jones to be a high-profile interview subject for this Sunday’s edition of her new NBC magazine show called “Sunday Night with Megyn Kelly.” The show premiered two Sundays ago (on June 4) on NBC with Kelly’s pointless interview with Vladimir Putin.

This week, with the Jones interview scheduled to air this weekend, and NBC already putting out teaser videos to promote it, the expressions of anger have been fast and furious, particularly on Twitter.

Among the ways this anger is being expressed: Tweets with photos of the Sandy Hook victims displayed and accompanied by words such as “26 reasons NOT to watch Megyn Kelly’s interview on NBC w/Sandy Hook denier & liar Alex Jones” (this one had a montage of all 26 massacre victims).

Among the problems with this interview is its timing. Kelly was scheduled to host a fundraiser in Washington tomorrow night being put on by a group called Sandy Hook Promises, described as an “anti-gun-violence group” founded by Sandy Hook parents.

The fundraiser is a gala that will give out awards to people who have been active in the fight against gun violence. The group has now dropped Kelly as host.

It really makes you wonder who’s making the decisions at NBC News this month. It’s possible someone thought Kelly would actually be applauded by the Sandy Hook group for “shining a light” on this conspiracy theorist, and possibly debunking him.

Kelly herself put out a tweet on Monday in which she defended the interview for doing just that. “Many don’t know him,” she said of Jones. “Our job is 2 shine a light.”

Even with the relatively small audience Kelly will draw early on a Sunday evening in June, many more people will know Alex Jones than knew him before by the time the interview and all the pre-show promo spots air this week.

To apply a metaphor here: Shining a light on cockroaches might make them scurry for the baseboards, but they’re still cockroaches.

In addition to this hosting gig being canceled, at least one major advertiser has apparently pulled itself out of Sunday’s Kelly show -- JP Morgan Chase. Since this is only Tuesday, more will likely follow this week. Then the decision has to be made at NBC about whether to air the interview at all.

I realize the month of June is high vacation season for network TV’s top brass, but surely there must be some grownups still on the job at NBC News this month who can step in and make the mature and necessary decision to yank this interview.