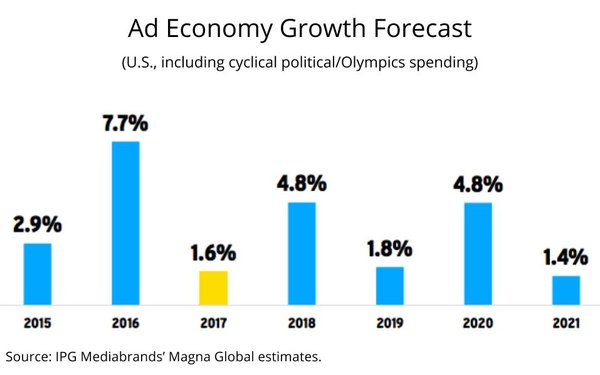 The U.S. ad economy is expanding at a much slower rate than a leading forecaster projected just three months ago. Magna Global, the market forecasting unit of IPG Mediabrands, this morning released a revised estimate for U.S. ad-spending growth that is marginally lower than the one it was projecting in its last forecast released in March.

Magna projects the U.S. ad market will expand 1.6% in 2017. In March, Magna forecast that it would expand 1.8%. That estimate is based on a "normalized" comparison that excludes the incremental effects of cyclical 2016 events such as the Olympics and election year ad spending.

On a nominal basis, Magna revised its forecast downward three-tenths of a point from a growth rate of 3.7% in March to a growth rate of 3.4% in its most recent forecast. (An earlier version of this story incorrectly compared normalized growth with nominal growth and indicated a more significant downward revision.)

In the report, Magna Executive Vice President-Global Market Intelligence Vincent Letang wrote that the revision follows a first-quarter slowdown that “also likely had something to do with the abrupt slowdown in economic activity: real GDP grew by just 1.2% in the first quarter compared to +3.5% in the third quarter of 2016 and 2.1% in the fourth quarter of 2016.

“Economists however consider this slowdown temporary and still expect the next few quarters to stay on course with previous forecasts, with real GDP growth in the mid 2% to low 3% range,” he explained, adding, however, that more recent data, including the Philadelphia Fed’s Survey of Professional Forecasters’ May update, “now expects full-year economic growth to be +2.1%,compared to +2.3% in its previous update in February.”

Letang, meanwhile, reports a stronger expansion for the global ad economy, which Magna now estimates will expand 3.7% in 2017.