First-quarter digital advertising earnings in the United States this year marked the highest ever, rising 23% to $19.6 billion, according to the latest IAB Internet Advertising Revenue Report released Wednesday by the Interactive Advertising Bureau (IAB).

The increase, demonstrated by the numbers prepared by PricewaterhouseCoopers US, marks the seventh consecutive first quarter to have double-digit year-over-year growth. 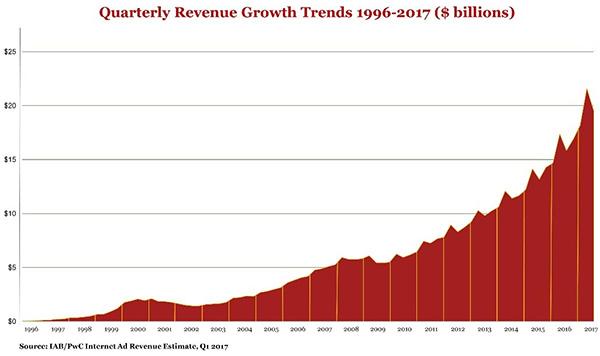 In fact, the $3.7 billion jump represents the second-highest quarter of all time and follows on the heels of the industry’s strongest quarter on record, which was $21.6 billion in the fourth quarter of 2016.

“These figures reflect marketers’ ongoing commitment to invest in digital,” said Chris Kuist, SVP of research and impact, IAB, in a prepared statement. “This steady growth is a direct result of interactive advertising’s power to reach consumers where they are spending more and more of their time — on connected screens.

”The full report is issued twice yearly, and top-line quarterly estimates are issued for the first and third quarters, per the IAB.