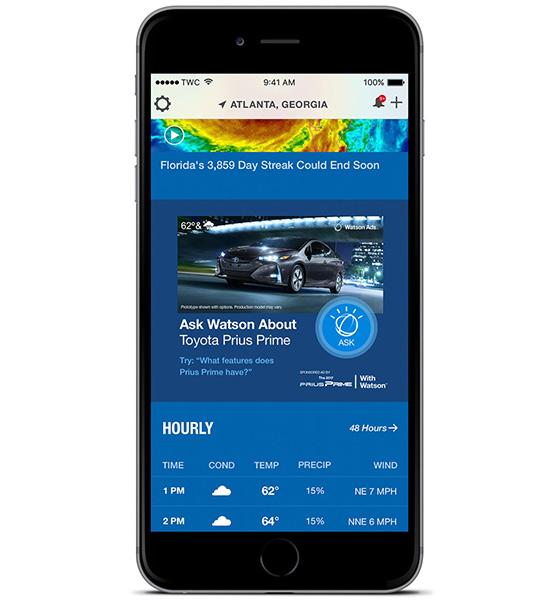 The ad units serve up across mobile and desktop on The Weather Channel app and weather.com, which provides weather data. The ads, which are scheduled to run through the third quarter of 2017, are part of a larger campaign.

Sarah Ripmaster, head of automotive sales, The Weather Company, said Toyota trained Watson on data from frequently asked questions to videos. "Watson ingested the data to understand how in-market shoppers interact and what types of questions they ask," she said. Watson only knows what you teach it. Ripmaster said. It doesn’t go out to the Internet to pull in information.

Rather than keyword searches, IBM Watson uses natural-language processing and machine learning to reveal insights from large amounts of structured and unstructured data fed into the platform, which is trained to identify queries and respond to questions with personalized answers in real time.

The ads are intended to direct consumers to a local dealer for a test drive, so it also displays information about scheduling a test drive. Through attribution technology and other data sources, Toyota can tie the ads back to a car's VIN number to determine what ultimately prompted a sale, such as the Watson Ads.

Here's how it works: The conversational app launches a dialog box that suggests to the site visitor to explore the Prius Prime. It also prepares the consumer to ask questions about efficiencies such as how far you can go on one charge and what type of gas mileage the car gets. It focuses on common topics that consumers would think about when considering the purchase of a new car.

When Watson doesn't have the answer, developers will identify the question and the gaps in knowledge to fill them in so the technology gets smarter with each use.

Ripmaster said The Weather Company hopes to run these ads on other publisher sites. This is the seventh Watson Ads campaign, which includes Campbell's, Country Crock, Theraflu, Flonase, among others.

In the past, brands have seen engagement rates of between one and two minutes, which is three times longer than a television commercial, she said.